Vopnafjörður is a village and municipality in Northeast Iceland, standing on a peninsula in the middle of a mountainous bay by the same name. The main industries of Vopnafjörður are fish processing, agriculture and tourism and other services.

Vopnafjörður is known for its salmon rivers and large areas of untouched landscape. Hofsá and Selá are two of the most exclusive salmon rivers in Iceland. The salmon rivers and other attractions in and around Vopnafjörður have drawn numerous foreign visitors, including artists, celebrities and politicians such as Charles, Prince of Wales, George Bush, Sr., Jack Nicklaus and Queen Paola of Belgium.

Vopnafjörður is on Route 85 and has an airport with scheduled flights to Akureyri on business days. Other services include Vopnafjarðarskóli primary school with 99 students, Leikskólinn Brekkubær preschool, Landsbankinn bank and Heilbrigðisstofnun Austurlands clinic.

HB Grandi, Iceland's largest fishing company, is the largest employer in the area. The company runs a high-tech freezing plant and a fishmeal factory in Vopnafjörður.

The bay of Vopnafjörður was first settled by Vikings in the late 9th century CE. The name Vopnafjörður literally means Weapon Fjord or Weapon Bay, and comes from the nickname of one of the settlers, Eyvindur vopni.

Disputes between local chieftains led to a number of killings in the 10th century. The story of the disputes is told in Vopnfirðinga saga, one of the classic Sagas of Icelanders, a series of epic family histories written in the 13th century.

Little is known about the history of Vopnafjörður after Iceland lost its independence to Norway in 1264. Foreign merchants sailed to Vopnafjörður in the early modern age, and it was one of three trade ports in East Iceland in the 17th and 18th centuries.

The Danish trading company Ørum & Wulff had extensive operations in Vopnafjörður in the 19th century. A local cooperative, Kaupfélag Vopnfirðinga, was established in 1918, and was one of Vopnafjörður's largest employers throughout the 20th century, but filed for bankruptcy in 2004.

In the late 19th century, poor farmers were forced to move into the mountains above Vopnafjörður, when they could no longer afford living on densely populated land in the lowlands. For several decades, many families lived in the highlands, experiencing extreme hardship. The highland farms inspired the setting of the novel Independent People by Halldór Laxness. The book helped him win the Nobel Prize in Literature in 1955.

Modern infrastructure, including roads, harbors and bridges, was first introduced in Vopnafjörður in the early 20th century. Today, new infrastructure is of highest standards.

Vopnafjörður was the largest port of Icelandic emigration to America in the late 19th and early 20th centuries. Thousands of North Americans have ancestors who lived in Vopnafjörður. 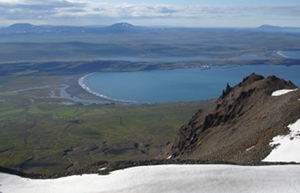 The bay seen from the top of Krossavík Mountains.

During the Ice Age (up to 10,000 years ago) a large glacier covered the bay. The Ice Age glacier carved the diverse mountains and rock formations that characterize the area. After the Ice Age, the land rose as the heavy load of the glacier fell away, and began to look as it does today.

The largest river to run into the bay is Hofsá, one of the best salmon-fishing rivers in the country. Krossavík Mountains at 1,077 metres (3,533 ft), tower over the bay.

The village of Vopnafjörður is located on the Tangi peninsula in the middle of the bay. Surrounding farms reach far into Hofsárdalur and Vesturárdalur valleys, and to the northern coast of the bay.

Vopnafjörður has a rainy, mild winter subarctic climate (Köppen: Dfc) or a subpolar oceanic climate (Cfc) depending on the isotherm used, −3 °C (27 °F) or 0 °C (32 °F), similar to the rest of coastal Iceland.Despite its extreme north Atlantic location, Vopnafjörður is much warmer than most locations at a similar latitude. Temperatures very rarely drop below −10 °C (14 °F) in the winter. This is because the Icelandic coastal weather in winter is moderated by the warm waters of the Gulf Stream. Summers are cool, with temperatures sometimes reaching 20 °C (68 °F). The climate has significantly warmed in recent years.

The local government is the municipality of Vopnafjarðarhreppur, which is governed by the municipal council. The council has seven members who are elected in direct elections by the residents of Vopnafjörður for four-year terms. Anyone who is 18 years or older and has his or her legal domicile registered in Vopnafjörður has the right to participate in the local elections. The last municipal elections were held in May 2010.

In 2010, the total population was 683, of whom 666 people held Icelandic citizenship. 17 were citizens of other countries, and did not hold dual Icelandic citizenship. Four of those were Danish citizens, one Finnish, three German, one Latvian, one Mexican, one Dutch, one Swiss, three Thai, one British, and one US.

Einherji is Vopnafjörður's sports team. Soccer is the most popular sport, followed by Volleyball.

Retrieved from "https://tme.miraheze.org/w/index.php?title=Vopnafjörður&oldid=42899"
Categories:
Hidden categories:
Cookies help us deliver our services. By using our services, you agree to our use of cookies.