From The Multilingual Encyclopedia
Jump to navigation Jump to search
For other uses, see Thursday (disambiguation).

See Names of the days of the week for more on naming conventions. 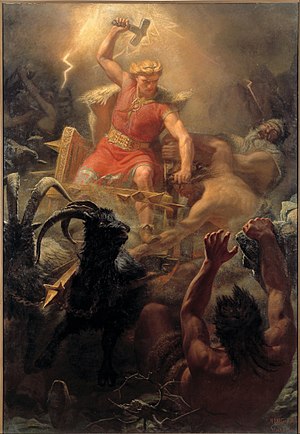 Painting depicting the Norse god Thunor (the Norse Thor), after whom Thursday is named, by Mårten Eskil Winge, 1872

The name is derived from Old English Þūnresdæg and Middle English Thuresday (with loss of -n-, first in northern dialects, from influence of Old Norse Þorsdagr) meaning "Thor's Day". It was named after the Norse god of Thunder, Thor. [1][2][3] Thunor, Donar (German, Donnerstag) and Thor are derived from the name of the Germanic god of thunder, Thunraz, equivalent to Jupiter in the interpretatio romana.

Estonians did not work on Thursdays (days of Thor) and Thursday nights were called "evenings of Tooru". Some sources say Estonians used to gather in holy woods (Hiis) on Thursday evenings, where a bagpipe player sat on a stone and played while people danced and sang until the dawn.

In most Romance languages, the day is named after the Roman god Jupiter, who was the god of sky and thunder. In Latin, the day was known as Iovis Dies, "Jupiter's Day". In Latin, the genitive or possessive case of Jupiter was Iovis/Jovis and thus in most Romance languages it became the word for Thursday: Italian giovedì, Spanish jueves, French jeudi, Sardinian jòvia, Catalan dijous, Galician "xoves" and Romanian joi. This is also reflected in the p-Celtic Welsh dydd Iau.

The astrological and astronomical sign of the planet Jupiter (♃

) is sometimes used to represent Thursday.

Since the Roman god Jupiter was identified with Thunor (Norse Thor in northern Europe), most Germanic languages name the day after this god: Torsdag in Danish, Norwegian, and Swedish, Hósdagur/Tórsdagur in Faroese, Donnerstag in German or Donderdag in Dutch. Finnish and Northern Sami, both non-Germanic (Uralic) languages, uses the borrowing "Torstai" and "Duorastat". In the extinct Polabian Slavic language, it was perundan, Perun being the Slavic equivalent of Thor.[4]

There are a number of modern names imitating the naming of Thursday after an equivalent of "Jupiter" in local tradition. In most of the languages of India, the word for Thursday is Guruvara – vara meaning day and guru being the style for Bṛhaspati, guru to the gods and regent of the planet Jupiter. In Thai, the word is Wan Pharuehatsabodi – referring to the Hindu deity Bṛhaspati, also associated with Jupiter. En was an old Illyrian deity and in his honor in the Albanian language Thursday is called "Enjte".[5] In the Nahuatl language, Thursday is Tezcatlipotōnal (Template:IPA-nah) meaning "day of Tezcatlipoca".

In the Christian tradition, Maundy Thursday or Holy Thursday is the Thursday before Easter — the day on which the Last Supper occurred. Also known as Sheer Thursday in the United Kingdom, it is traditionally a day of cleaning and giving out Maundy money there. Holy Thursday is part of Holy Week.

In the Eastern Orthodox Church. Thursdays are dedicated to the Apostles and Saint Nicholas. The Octoechos contains hymns on these themes, arranged in an eight-week cycle, that are chanted on Thursdays throughout the year. At the end of Divine Services on Thursday, the dismissal begins with the words: "May Christ our True God, through the intercessions of his most-pure Mother, of the holy, glorious and all-laudable Apostles, of our Father among the saints Nicholas, Archbishop of Myra in Lycia, the Wonder-worker…"

Ascension Thursday is 40 days after Easter, when Christ ascended into Heaven.

In the United States, Thanksgiving Day is an annual festival celebrated on the fourth Thursday in November.

In Judaism, Thursdays are considered auspicious days for fasting. The Didache warned early Christians not to fast on Thursdays to avoid Judaizing, and suggested Fridays instead.

In Judaism the Torah is read in public on Thursday mornings, and special penitential prayers are said on Thursday, unless there is a special occasion for happiness which cancels them.

In Buddhist Thailand Thursday is considered the "Teacher's Day", and it is believed that one should begin one's education on this auspicious day. Thai students still pay homages to their teachers in specific ceremony always held on a selected Thursday. And graduation day in Thai universities, which can vary depending on each university, almost always will be held on a Thursday.

In the Thai solar calendar, the colour associated with Thursday is orange.

In Australia, most cinema movies premieres are held on Thursdays. Also, most Australians are paid on a Thursday, either weekly or fortnightly. Shopping malls see this as an opportunity to open longer than usual, generally until 9 pm, as most pay cheques are cleared by Thursday morning.

In Norway, Thursday has also traditionally been the day when most shops and malls are open later than on the other weekdays, although the majority of shopping malls now are open until 8 pm or 9 pm every weekday.

In the USSR of the 1970s and 1980s Thursday was the "Fish Day" (Russian: Рыбный день, Rybny den), when the nation's foodservice establishments were supposed to serve fish (rather than meat) dishes.[7]

For college and university students, Thursday is sometimes referred to as the new Friday. There are often fewer or sometimes no classes on Fridays and more opportunities to hold parties on Thursday night and sleep in on Friday. As a consequence, some call Thursday "thirstday" or "thirsty Thursday".[8]

In the United Kingdom, all general elections since 1935 have been held on a Thursday, and this has become a tradition, although not a requirement of the law — which merely states that an election may be held on any day "except Saturdays, Sundays, Christmas Eve, Christmas Day, Good Friday, bank holidays in any part of the United Kingdom and any day appointed for public thanksgiving and mourning."[9]

Additionally, local elections are usually held on the first Thursday in May.[citation needed]

The Electoral Administration Act 2006 removed Maundy Thursday as an excluded day on the electoral timetable, therefore an election can now be held on Maundy Thursday; prior to this elections were sometimes scheduled on the Tuesday before as an alternative.

Thursday is aligned by the planet Jupiter and the astrological signs of Pisces and Sagittarius.

Retrieved from "https://tme.miraheze.org/w/index.php?title=Thursday&oldid=22521"
Categories:
Hidden categories:
Cookies help us deliver our services. By using our services, you agree to our use of cookies.