From The Multilingual Encyclopedia
Jump to navigation Jump to search
For other uses, see Friday (disambiguation).

The name Friday comes from the Old English Frīġedæġ, meaning the "day of Frige", a result of an old convention associating the Old English goddess Frigg with the Roman goddess Venus, with whom the day is associated in many different cultures. The same holds for Frīatag in Old High German, Freitag in Modern German, and vrijdag in Dutch.

The expected cognate name in Old Norse would be *friggjar-dagr. However, the name of Friday in Old Norse is frjá-dagr instead, indicating a loan of the week-day names from Low German.[3] The modern Scandinavian form is Fredag in Swedish, Norwegian, and Danish, meaning Freyja's day. The distinction between Freyja and Frigg in some Germanic mythologies is contested. 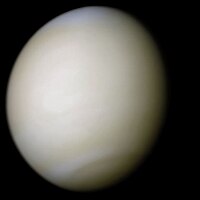 Friday is associated in many cultures with the love goddess Venus, and the planet named for her.

The word for Friday in most Romance languages is derived from Latin dies Veneris or "day of Venus" (a translation of Greek Aphrodites hemera), such as vendredi in French, divendres in Catalan, vennari in Corsican, venerdì in Italian, vineri in Romanian, and viernes in Spanish and influencing the Filipino biyernes or byernes. This is also reflected in the p-Celtic Welsh language as Gwener .

An exception is Portuguese, also a Romance language, which uses the word sexta-feira, meaning "sixth day of liturgical celebration", derived from the Latin "feria sexta" used in religious texts where it was not allowed to consecrate days to pagan gods. The Sardinian word chenàpura also figures as an exception among all the other Romance languages, since it is derived from Latin cena pura. This name had been given by the Jewish community exiled to the island in order to designate the food specifically prepared for Shabbat eve.[4]

In Arabic, Friday is الجمعة al-jum`ah, from a root meaning "congregation/gathering." In languages of Islamic countries outside the Arab world, the word for Friday is commonly a derivation of this: (Indonesian jumat, Malay jumaat, Turkish cuma, Persian "جمعه").

In modern Greek, four of the words for the week-days are derived from ordinals. However, the Greek word for Friday is Paraskevi (Παρασκευή) and is derived from a word meaning "to prepare" (παρασκευάζω). Like Saturday (Savvato, Σάββατο) and Sunday (Kyriaki, Κυριακή), Friday is named for its liturgical significance as the day of preparation before Sabbath, which was inherited by Greek Christian Orthodox culture from Jewish practices.

Friday was formerly a Christian fast day; this is the origin of the Irish Dé hAoine, Scottish Gaelic Di-Haoine, Manx Jeheiney and Icelandic föstudagur, all meaning "fast day".

In both biblical and modern Hebrew, Friday is Yom Shishi meaning "the sixth day."

In most of the Indian languages, Friday is Shukravar (or a derived variation of Sukravar), named for Shukra, the Sanskrit name of the planet Venus. In Bengali শুক্রবার or Shukrobar is the 6th day in the Bengali week of Bengali Calendar and is the beginning of the weekend is Bangladesh.

In the Korean language, it is 금요일 in Korean Hangul writing (Romanization: geumyoil), as is pronounced of the written word 金曜日 in Chinese characters, as in Japanese.

In the Nahuatl language, Friday is Quetzalcōātōnal (Template:IPA-nah) meaning "day of Quetzalcoatl".

Friday is considered unlucky in some cultures. This is particularly so in maritime circles; perhaps the most enduring sailing superstition is that it is unlucky to begin a voyage on a Friday.[6][7] In the 19th century, Admiral William Henry Smyth described Friday in his nautical lexicon The Sailor's Word-Book as:

“The Dies Infaustus, on which old seamen were desirous of not getting under weigh, as ill-omened.[8]”

(Dies Infaustus means "unlucky day".[9]) This superstition is the root of the well-known urban legend of HMS Friday.

In modern times, Friday the 13th is considered to be especially unlucky, due to the conjunction of Friday with the unlucky number thirteen. Such a Friday may be called a "Black Friday".

However, this superstition is not universal, notably in Scottish Gaelic culture:

“Though Friday has always been held an unlucky day in many Christian countries, still in the Hebrides it is supposed that it is a lucky day for sowing the seed. Good Friday in particular is a favourite day for potato planting—even strict Roman Catholics make a point of planting a bucketful on that day. Probably the idea is that as the Resurrection followed the Crucifixion, and Burial so too in the case of the seed, and after death will come life?[10]”

In astrology, Friday is connected with the planet Venus and is symbolized by that planet's symbol ♀. Friday is also associated with the astrological signs Libra and Taurus.

In Christianity, Good Friday is the Friday before Easter. It commemorates the crucifixion of Jesus.

Traditionally, Roman Catholics were obliged to refrain from eating the meat of land animals on Fridays, although fish was allowed. However, Episcopal conferences are now authorized to allow some other form of penance to replace abstinence from meat. Nonetheless, many Christians still choose the traditional form of Friday penance.[citation needed]

Canon 1250. The days and times of penance for the universal Church are each Friday of the whole year and the season of Lent.
Canon 1251. Abstinence from meat, or from some other food as determined by the Episcopal Conference, is to be observed on all Fridays, unless a solemnity should fall on a Friday. Abstinence and fasting are to be observed on Ash Wednesday and Good Friday.
Canon 1253. The Episcopal Conference can determine more particular ways in which fasting and abstinence are to be observed. In place of abstinence or fasting it can substitute, in whole or in part, other forms of penance, especially works of charity and exercises of piety.[11]

Some Anglicans (particularly Anglo-Catholics) also practice abstinence from meat either on all Fridays or on Fridays in Lent. More generally, traditional Anglican Prayer Books prescribe weekly Friday abstinence for all Anglicans.[12][13]

The Eastern Orthodox Church continues to observe Fridays (as well as Wednesdays) as fast days throughout the year (with the exception of several fast-free periods during the year). Fasting on Fridays entails abstinence from meat or meat products (i.e., quadrupeds), poultry, and dairy products (as well as fish). Unless a feast day occurs on a Friday, the Orthodox also abstain from using oil in their cooking and from alcoholic beverages (there is some debate over whether abstention from oil involves all cooking oil or only olive oil). On particularly important feast days, fish may also be permitted. For the Orthodox, Fridays throughout the year commemorate the Crucifixion of Christ and the Theotokos (Mother of God), especially as she stood by the foot of the cross. There are hymns in the Octoekhos which reflect this liturgically. These include Theotokia (hymns to the Mother of God) which are chanted on Wednesdays and Fridays called Stavrotheotokia ("Cross-Theotokia"). The dismissal at the end of services on Fridays begins with the words: "May Christ our true God, through the power of the precious and life-giving cross...."

In Hinduism, special observances are practiced for goddesses, mainly for Durga and Lakshmi on Friday.

In Islam, Friday (from sun-down Thursday to sun-down Friday, simpler than midnight to midnight in a pre-clock age) corresponds as a holy day to Sunday in Christianity and Saturday (Friday evening to Saturday evening) in Judaism and Sabbatarian Christianity. Friday observance includes attendance at a mosque for congregation prayer or Salat AlJumu'ah. It is considered a day of peace and mercy (see Jumu'ah) as well as a day of rest.

Muslim Friday prayer at a mosque in Malaysia

According to some Islamic traditions, the day is stated to be the original holy day ordained by Allah, but that now Jews and Christians recognize the days after.[15][16] In some Islamic countries, the week begins on Sunday and ends on Saturday, just like the Jewish week and the week in some Christian countries. The week begins on Saturday and ends on Friday in most other Islamic countries, such as Saudi Arabia, Somalia, and Iran. Friday is also the day of rest in the Bahá'í Faith.[17] In some Malaysian states, Friday is made as the first week-end, with Saturday as the second week-end to allow Muslims to perform their religious obligations on Friday in a more peaceful manner.[18] Sunday is the first working day of the week for governmental organisations.

Jewish Sabbath begins at sunset on Friday and lasts until nightfall on Saturday. There is a Jewish custom to fast on the Friday of the week of Chukat.

In Thailand, the color associated with Friday is blue (see Thai calendar).