December is the twelfth and final month of the year in the Julian and Gregorian Calendars. It is the seventh and last month to have the length of 31 days. 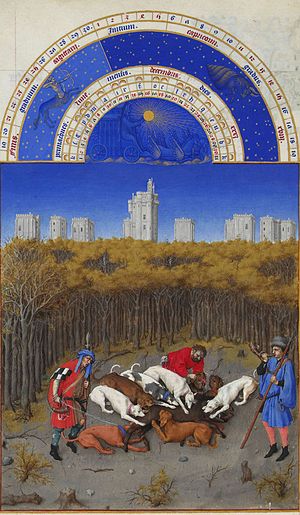 December got its name from the Latin word decem (meaning ten) because it was originally the tenth month of the year in the Roman calendar, which began in March. The winter days following December were not included as part of any month. Later, the months of January and February were created out of the monthless period and added to the beginning of the calendar, but December retained its name.[1]

The Anglo-Saxons referred to December–January as Ġēolamonaþ (modern English: "Yule month"). The French Republican Calendar contained December within the months of Frimaire and Nivôse.

(please note that all Jewish observances, which are set by the Hebrew calendar, begin at sunset the day prior to the date listed and end on the sunset of the date in question unless otherwise noted. The same applies to observances set by the Bahá'í calendar, and by the Islamic calendar)

December 22, unless that date is a Sunday, in which case it's moved to the 23rd

December 26, unless that day is a Sunday, in which case the 27th

Sunday after Christmas, or on the 30th if Christmas falls on a Sunday

A Christmas market in Dresden