Caltron 6 in 1 is a multicart published in 1992 for the Nintendo Entertainment System in North America,[1] released by Caltron, a Taiwan-based video game company which was either closely related to, or simply a pseudonym for, NTDEC.[2] In Australia, it was published under the title Real Players Pack by Home Entertainment Suppliers (HES).[3] This version is regarded by collectors as the rarest HES game. Dynacom released the cartridge as Multi Ação 6-in-1 for the Brazilian market.[4]

6 in 1, as its title suggests, consists of six different games of various genres. The games included, which are mostly clones of other popular video games of the era, are Cosmos Cop, Adam & Eve, Magic Carpet 1001, Balloon Monster, Porter and Bookyman.[2] These games were all previously released separately in Famicom format by NTDEC, often under the name Mega Soft.

The compilation has received poor reviews, with one reviewer claiming that all six games on the multicart are "uniformly awful [and] barely first-generation NES quality", even though they are more playable and are of "much higher quality" than other unlicensed video game compilations, specifically citing Active Enterprises' Action 52 as the comparative example.[2]

The six games included on Caltron 6 in 1 are: 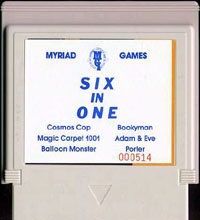 When Caltron Industries, Inc. was going out of business, Myriad Games, Inc., a company based in Kingwood, Texas, bought all of their existing inventory of tan cartridges. Myriad then took the carts and added a very generic (no graphic art) label. They were then packaged in custom boxes with a folded manual. Each Myriad cart and box were numbered individually.

Myriad's only change to Caltron's product was to replace the label with their own. In fact, the edges of the Caltron label are still visible, as the Myriad label is slightly too small to cover it. No programming changes were done, hence the game is exactly the same, including the title screen which still reads "Caltron". The six games on the cart are identical to Caltron's release.

Shortly after the release of 6 in 1, Myriad went out of business for unknown reasons. The game has become one of the rarest unlicensed games made for the NES. Collectors speculate that fewer than 100 copies of this game still exist, and even fewer are complete. The most valuable copies of the game are those with box, instructions and the cartridge with matching serial numbers. The lowest known serial number is 000003 and the highest is 000888. At least two sealed versions are known to exist.[5][6]

Retrieved from "https://tme.miraheze.org/w/index.php?title=Caltron_6_in_1&oldid=2415"
Categories:
Cookies help us deliver our services. By using our services, you agree to our use of cookies.