From The Multilingual Encyclopedia
Jump to navigation Jump to search
This article is about the group of nations known as CIVETS. For other uses, see Civet (disambiguation). 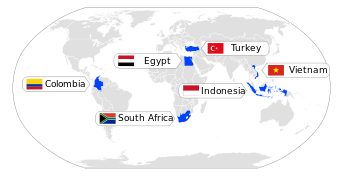 The CIVETS are six favored emerging markets countries – Colombia, Indonesia, Vietnam, Egypt, Turkey and South Africa.[1] These countries are favored for several reasons, such as "a diverse and dynamic economy" and "a young, growing population".[2] This list is comparable to the Next Eleven, devised by Jim O'Neill of Goldman Sachs.

The acronym CIVETS was coined by Robert Ward, Global Director of the Global Forecasting Team of the Economist Intelligence Unit (EIU) in late 2009,[3][not in citation given] and was further disseminated by Michael Geoghegan, President of the Anglo-Chinese HSBC, in a speech to the Hong Kong Chamber of Commerce in April 2010. Geoghegan compared these countries to the civet, a carnivorous mammal that eats and partially digests coffee cherries, passing a transformed coffee bean that fetches high prices.

The economies that are part of this group are considered to be very promising because they have reasonably sophisticated financial systems, controlled inflation, and soaring young populations.[4]

Michael Geoghegan has called these countries "the new BRICS" because of their potential as second-generation emerging economies. In 2010 he said, "emerging markets will grow three times as fast as developed countries this year", adding that the center of gravity of the world was moving towards the East and the South (Asia and Latin America).[5]

As well as being seen as attractive markets, the role of CIVETS countries in global governance is also discussed, especially at the G20, of which Indonesia, South Africa and Turkey are members. They are already perceived as "development providers investing in peer-to-peer learning and horizontal partnerships and (...) are bound to become strategic players at the G20, UN and IFI levels".[6] In view of this, during the 2011 annual meetings of the International Monetary Fund and the World Bank, the economy and finance ministers of the CIVETS countries established a formal mechanism for communication and coordination.[7]

All the CIVETS countries except Colombia and South Africa are also 'Next Eleven' countries.

All of these states also share similar challenges: unemployment, corruption, and inequality are persistent problems in most of the countries of the group.

Although Colombia is the oldest democracy in Latin America,[8][9] it has suffered conflict for more than 40 years. This threatened its stability, but has changed dramatically in recent years, improving stability.

There are policies that favor the creation of new businesses, and foreigners can integrate into this market without any major hurdles.[10] Foreign investment increased five-fold between 2002 and 2010,[11] and there has also been a petroleum boom.[12] The government is devising strategies to avoid the Dutch disease as billions of dollars enter the country.

As of August 2010[update], Colombia has a budget deficit of 3.6%. The inflation rate is 2.6% and external debt a modest 47% of gross domestic product.[13] The influx of foreign money is leading to improvements in infrastructure.

Indonesia is a member of ASEAN.

After emerging as the third-fastest-growing member of the G20 in 2009, Indonesia has been a strong performer. Like China and India, it is expanding rapidly. Investment growth in 2009 was boosted by infrastructure spending and high commodity prices. Last year[when?] Indonesia expanded at 4.4%.

Vietnam is a member of ASEAN.

After the death of its leader Lê Duẩn in 1986, Vietnam began making the transition from a planned economy to a socialist-oriented market economy, after suffering an inflation rate of 700% and a stagnant economy.[15] The Communist Party launched a broad economic reform package called Doi Moi ("Renewal"), with similarities to the Chinese model (economic openness mixed with communist politics), and achieving similar results. Between 1990 and 1997 Vietnam's economy grew at 8% per annum, with similar results in the following years.

Vietnam's rapid growth from the extreme poverty of 1986 has given rise to western consumerist habits, especially among the new rich of Vietnam, opening the gap of social inequality and bringing inflation up to 12%, after it had recovered to 4%. However, Communist Party leaders are optimistic of maintaining the growth rate so that in 2020 it will be considered a newly industrialized country.[16]

In September 2011 the World Bank predicted growth of just 1% for that year, compared with 5.2% in the previous year, but analysts expected Egypt to regain its growth trajectory once political stability returned. Egypt has many assets, including fast-growing ports on the Mediterranean and Red Sea linked by the Suez Canal, a growing tourism network, and vast untapped natural gas reserves. Egypt's 82 million population has a median age of 25.[17]

In 2011 Turkey had the world's 15th largest GDP-PPP[18] and 18th largest Nominal GDP.[19] The country is a founding member of the OECD (1961) and the G-20 major economies (1999). Since December 31, 1995, it has been part of the EU Customs Union. Mean wages were $8.71 per man-hour in 2009. Turkey grew at an average rate of 7.5 percent between 2002 and 2006, faster than any other OECD country. Over the past 20 years, Turkey has made significant improvements in economic freedoms. It has expanded monetary freedom, freedom from corruption, and fiscal freedom; these advancements have, nevertheless, been undermined by Turkey's deteriorating property rights and financial freedom.[20]

The CIA classifies Turkey as a developed country.[25] It is often classified as a newly industrialized country by economists and political scientists.[26][27][28]

South Africa is Africa's second largest economy and represents 25% of its GDP, making it important to the development of the whole region. The South African economy has a large volume of capital (public and private) in close relation to the global economic grids.Template:Technical statement

The currency of South Africa is the rand, which is also used in other countries of Southern Africa. The Johannesburg Stock Exchange is the biggest in Africa and tenth globally.

Major sectors of the economy are mining (especially coal extraction), diamonds, gold and platinum. It among the countries with the greatest reserves and diversity of mineral wealth. It has the most powerful and diversified industry in Africa, from processing of agricultural goods and minerals to the automotive, aerospace and energy industries.

South Africa's national parks, which attract visitors from around the world, play a significant role in its economy.

According to the 2012 CIA World Factbook:[when?]

Retrieved from "https://tme.miraheze.org/w/index.php?title=CIVETS&oldid=16152"
Categories:
Hidden categories:
Cookies help us deliver our services. By using our services, you agree to our use of cookies.