From The Multilingual Encyclopedia
(Redirected from CIA World Factbook)
Jump to navigation Jump to search
Not to be confused with Encyclopedia of the Central Intelligence Agency.

The World Factbook (ISSN 1553-8133; also known as the CIA World Factbook)[2] is a reference resource produced by the Central Intelligence Agency (CIA) with almanac-style information about the countries of the world. The official print version is available from the National Technical Information Service and the Government Printing Office. Other companies—such as Skyhorse Publishing—also print a paper edition. The Factbook is available in the form of a website that is partially updated every week. It is also available for download for use off-line. It provides a two- to three-page summary of the demographics, geography, communications, government, economy, and military of each of 267 international entities[3] including U.S.-recognized countries, dependencies, and other areas in the world.

The World Factbook is prepared by the CIA for the use of U.S. government officials, and its style, format, coverage, and content are primarily designed to meet their requirements.[4] However, it is frequently used as a resource for academic research papers and news articles.[5] As a work of the U.S. government, it is in the public domain in the United States.[6]

In researching the Factbook, the CIA uses the sources listed below. Other public and private sources are also consulted.[4]

The World Factbook website as it appeared in December 2014

Because the Factbook is in the public domain, people are free under United States law to redistribute it or parts of it in any way that they like, without permission of the CIA.[4] However, the CIA requests that it be cited when the Factbook is used.[6] Copying the official seal of the CIA without permission is prohibited by U.S. federal law—specifically, the Central Intelligence Agency Act of 1949 (50 U.S.C. § 403m).

Before November 2001 The World Factbook website was updated yearly;[7] from 2004 to 2010 it was updated every two weeks;[7] since 2010 it has been updated weekly.[8] Generally, information currently available as of January 1 of the current year[9] is used in preparing the Factbook.

The first, classified, edition of Factbook was published in August 1962, and the first unclassified version in June 1971.[10] The World Factbook was first available to the public in print in 1975.[10] In 2008 the CIA discontinued printing the Factbook themselves, instead turning printing responsibilities over to the Government Printing Office.[11] This happened due to a CIA decision to "focus Factbook resources" on the online edition.[12] The Factbook has been on the World Wide Web since October 1994.[13] The web version gets an average of 6 million visits per month;[5] it can also be downloaded.[14] The official printed version is sold[15] by the Government Printing Office and National Technical Information Service. In past years, the Factbook was available on CD-ROM,[16] microfiche,[17] magnetic tape,[17] and floppy disk.[17]

Many Internet sites use information and images from the CIA World Factbook.[18] Several publishers, including Grand River Books,[19] Potomac Books (formerly known as Brassey's Inc.),[20] and Skyhorse Publishing[21] have re-published the Factbook in recent years.

Main article: List of entities and changes in The World Factbook

As of July 2011, The World Factbook consists of 267 entities.[3] These entities can be divided into categories.[22] They are:

Areas not covered
Specific regions within a country or areas in dispute among countries, such as Kashmir, are not covered,[23] but other areas of the world whose status is disputed, such as the Spratly Islands, have entries.[23][24] Subnational areas of countries (such as U.S. states or the Canadian provinces and territories) are not included in the Factbook. Instead, users looking for information about subnational areas are referred to "a comprehensive encyclopedia" for their reference needs.[25] This criterion was invoked in the 2007[26] and 2011[27] editions with the decision to drop the entries for French Guiana, Guadeloupe, Martinique, Mayotte, and Reunion. They were dropped because besides being overseas departments, they were now overseas regions, and an integral part of France.[26][27]

Kashmir
Maps depicting Kashmir have the Indo-Pakistani border drawn at the Line of Control, but the region of Kashmir administered by China drawn in hash marks.[28]

Northern Cyprus
Northern Cyprus, which the U.S. considers part of the Republic of Cyprus, is not given a separate entry because "territorial occupations/annexations not recognized by the United States Government are not shown on U.S. Government maps."[29]

Taiwan/Republic of China
The name "Republic of China" is not listed as Taiwan's official name under the "Government" section,[30] due to U.S. acknowledgement of Beijing's One-China policy according to which there is one China and Taiwan is a part of it.[31] The name "Republic of China" was briefly added on January 27, 2005,[32] but has since been changed back to "none".[30] Of the Factbook's two maps of China, one highlights the island of Taiwan highlighted as part of the country[28] while the other does not.[33] (See also: Political status of Taiwan, Legal status of Taiwan)

Disputed South China Sea Islands
The Paracel Islands and Spratly Islands, subjects of territorial disputes, have entries in the Factbook where they are not listed as the territory of any one nation. The disputed claims to the islands are discussed in the entries.[34][35]

Burma/Myanmar
The U.S. does not recognize the renaming of Burma by its ruling military junta to Myanmar and thus keeps its entry for the country under the Burma name.[36]

European Union
On December 16, 2004, the CIA added an entry for the European Union (EU) for the first time.[43][44]) The "What's New" section of the 2005 Factbook states: "The European Union continues to accrue more nation-like characteristics for itself and so a separate listing was deemed appropriate."[31]

Serbia and Montenegro/Yugoslavia
The Socialist Federal Republic of Yugoslavia (SFRY) broke apart in 1991. The following year, it was replaced in the Factbook with entries for each of its former constituent republics.[38] In doing this, the CIA listed the Federal Republic of Yugoslavia (FRY), proclaimed in 1992, as Serbia and Montenegro, as the U.S. did not recognize the union between the two republics.[50][51] This was done in accordance with a May 21, 1992, decision[52] by the U.S. not to recognize any of the former Yugoslav republics[53] as successor states to the recently dissolved SFRY. 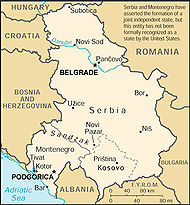 A map of Serbia and Montenegro from the 2000 edition of The World Factbook.[54] Notice how the disclaimer is printed in the upper right hand corner. One can see how the capital cities of both republics are individually labeled on the map.

These views were made clear in a disclaimer printed in the Factbook: "Serbia and Montenegro have asserted the formation of a joint independent state, but this entity has not been recognized as a state by the United States."[55] Montenegro and Serbia were treated separately in the Factbook data, as can be seen on the map.[56] In October 2000, Slobodan Milošević was forced out of office after a disputed election.[57] This event led to democratic elections and U.S. diplomatic recognition. The 2001 edition of the Factbook thus referred to the state as Yugoslavia.[58] On March 14, 2002, an agreement was signed to transform the FRY into a loose state union called Serbia and Montenegro;[59] it took effect on February 4, 2003.[60] The name of the Yugoslavia entity was altered in the Factbook the month after the change.[61]

Kosovo
On February 28, 2008, the CIA added an entry for Kosovo, which declared independence on February 17 of the same year.[62] Before this, Kosovo was excluded in the Factbook.[23] Kosovo is the subject of a territorial dispute; Serbia continues to claim Kosovo as part of its own sovereign territory. Kosovo's independence has been recognised by 111 out of Template:UNnum United Nations member states, including the United States.[63]

East Timor/Timor-Leste
On July 19, 2007, the entry for East Timor was renamed Timor-Leste following a decision of the United States Board on Geographic Names (BGN).[64]

The Factbook is full of usually minor errors, inaccuracies, and out-of-date information, which are often repeated elsewhere due to the Factbook's widespread use as a reference. For example, Albania was until recently, described in the Factbook as 70% Muslim, 20% Eastern Orthodox, and 10% Roman Catholic, which was based on a survey conducted in 1939, before World War II; numerous surveys conducted since the fall of the Communist regime since 1990 have given quite different figures. Another example is Singapore, which the Factbook states has a total fertility rate of 0.78 children per woman, despite figures in Statistics Singapore which state that the rate has been about 1.2–1.3 children per woman for at least the past several years, and it is unclear when, or even whether, it ever dropped as low as 0.78.[65] This low and inaccurate value then gets cited in news articles which state that Singapore has the world's lowest fertility, or at least use the figure for its shock value.[66][67] Another serious problem is that the Factbook never cites its sources, making verification of the information it presents difficult if not impossible.

In June 2009, National Public Radio (NPR), relying on information obtained from the CIA World Factbook, put the number of Israeli Jews living in settlements in the West Bank and Israeli-annexed East Jerusalem at 250,000. However, a better estimate, based on State Department and Israeli sources put the figure at about 500,000. NPR then issued a correction. Chuck Holmes, foreign editor for NPR Digital, said, "I'm surprised and displeased, and it makes me wonder what other information is out-of-date or incorrect in the CIA World Factbook."[68]

Scholars have acknowledged that some entries in the Factbook are out of date.[69]

The Factbook by year[edit | edit source]

Retrieved from "https://tme.miraheze.org/w/index.php?title=The_World_Factbook&oldid=24932"
Categories:
Cookies help us deliver our services. By using our services, you agree to our use of cookies.