From The Multilingual Encyclopedia
Jump to navigation Jump to search
Not to be confused with Buffalo Niagara Region.

Template:Infobox U.S. metropolitan area The Buffalo-Niagara Falls Metropolitan Statistical Area is a metropolitan area, designated by the United States Census Bureau, encompassing two counties – Erie and Niagara – in Western New York, with a population, as of the 2010 census, of 1,135,509 inhabitants. It is the second-largest metropolitan area in the state of New York, centering on the urbanized area of Buffalo.

As of the April 1, 2010, the metropolitan statistical area (MSA) had a population of 1,135,509; the combined statistical area (CSA), which adds Cattaraugus, had a population of 1,215,826 inhabitants. It is part of the Great Lakes Megalopolis, which contains an estimated 54 million people. The larger Buffalo Niagara Region is an economic zone consisting of eight counties in Western New York.

In 2010, the Buffalo – Niagara Falls metropolitan statistical area was ranked the 10th best place in the U.S. for working mothers by ForbesWoman magazine.[1] 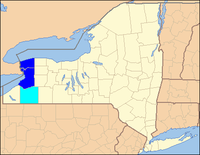 The Buffalo–Niagara–Cattaraugus Combined Statistical Area is made up of three counties in western New York. The statistical area includes one metropolitan area and one micropolitan area.[4] As of the 2010 Census, the CSA had a population of 1,215,826.[5]

Retrieved from "https://tme.miraheze.org/w/index.php?title=Buffalo–Niagara_Falls_metropolitan_area&oldid=34145"
Categories:
Hidden categories:
Cookies help us deliver our services. By using our services, you agree to our use of cookies.