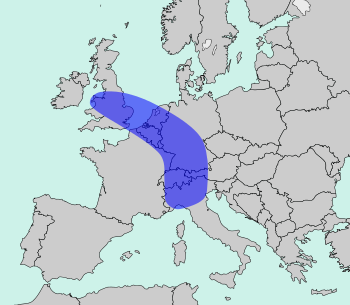 The Blue Banana (French: banane bleue, also known as the European Megalopolis or the Manchester–Milan Axis) is a discontinuous corridor of urbanisation in Western Europe, with a population of around 111 million.[1] The concept was developed in 1989 by RECLUS, a group of French geographers managed by Roger Brunet.[2]

It stretches approximately from North West England across Greater London to the Benelux states and along the German Rhineland, Southern Germany, Alsace in France in the west and Switzerland to Northern Italy in the south.[3][4]

Population density in Europe, showing the highest density along the Blue Banana

The French geographer Roger Brunet, who wished to subdivide Europe into "active" and "passive" spaces, developed the concept of a West European "backbone" in 1989. He made reference to an urban corridor of industry and services stretching from northern England to northern Italy. Brunet did not see it as a new discovery, but as something easily predictable to anyone with "a little bit of intelligence and a feel for spatial properties."

He saw the Blue Banana as the development of historical precedents, e.g. known trade routes, or as the consequence of the accumulation of industrial capital. In his analysis, Brunet excluded the Paris urban area and other French conurbations because of the French economic insularity. His aim was a greater economic integration in Europe, but he felt that France had lost this connection in the 17th century. France, in his view, lost its links to the corridor as a result of its persecution of minorities (viz. the Huguenots) and excessive centralisation in Paris.[5][6] Later versions do, however, include Paris.[7]

Large population centres, e.g. Randstad, the Ruhr and Manchester, developed with the Industrial Revolution and further development would occur in areas that lay between these powerhouses.

Because of its simplicity and memorability, the term was rapidly adopted by the media, and became subject to promotional manipulation. Local authorities within the Blue Banana tried to redefine it as the best place for business investment. This gave other interested parties good reason to blur the boundaries to include regions they wished to promote. This was the opposite of Brunet's intention.

Detractors[who?] have pointed out that similar corridors of importance can be found along the Danube and on the Baltic and Mediterranean coasts, and that conurbations exist around Berlin, Paris, Prague, Budapest and Warsaw. More importantly, the Blue Banana includes vast tracts of sparsely populated area (the North Sea and the Alps), and does not take into account the difficulties that have been experienced by Wallonia, Lorraine, the Ruhr, and Saarland in trying to adjust to economic changes.

Brunet's intention was to criticise French policies and his ideas were taken on board, so that today the Blue Banana model is Template:Weasel-inline: the former conurbations have grown several new branches, including one stretching from Paris to southern Spain, and the last few years have seen so much expansion that one might speak of a Blue Star — although the Blue Banana remains at its core.

New regions that have been compared to the Blue Banana can be found on the Mediterranean coast between Valencia and Genoa, as part of the Golden Banana, or "European Sunbelt", paralleling that of America (where a pleasant climate along with weaker position of trade unions draws newer industries), and in the north of Germany, where another conurbation lies on the North Sea coast, stretching into Denmark and from there into southern Scandinavia.

An influx of immigrants, who move by preference to the more prosperous, densely inhabited regions, has resulted in a disequilibrium in growth that is so severe that it may lead to polarisation within Europe, and a fragmentation into economic "winners" (inhabitants of the Blue Banana) and "losers" (rural areas, remote towns, and Eastern Europe in general). The most serious problems lie with the people in outlying regions, who face a vicious circle of administrative neglect and gradual depopulation, thus becoming increasingly dependent. In addition, the fact that high-speed train services are only viable in wealthy and heavily populated areas means that peripheral towns face yet more competitive disadvantages in comparison to urban centres.

Retrieved from "https://tme.miraheze.org/w/index.php?title=Blue_Banana&oldid=31040"
Categories:
Hidden categories:
Cookies help us deliver our services. By using our services, you agree to our use of cookies.