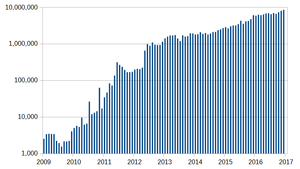 Number of transactions per month

The bitcoin scalability problem is a consequence of the fact that records (known as blocks) in the blockchain are limited to one megabyte in size.[1] Bitcoin miner fees for processing bitcoin transactions rose to above $25 per transaction in December 2017, making small payments uneconomical.[2][3]

The one-megabyte limit has created a bottleneck in bitcoin, resulting in increasing transaction fees and delayed processing of transactions that cannot be fit into a block.[8] Various proposals have come forth on how to scale bitcoin, and a contentious debate has resulted. Business Insider in 2017 characterized this debate as an "ideological battle over bitcoin's future."[9]

A fork is what occurs when a blockchain splits into two distinct paths moving forward. Forks on the bitcoin network regularly occur as part of the mining process. They happen when two miners find a block at a similar point in time. As a result, the network briefly forks. This fork is subsequently resolved by the software which automatically chooses the longest chain, thereby orphaning the extra blocks added to the shorter chain (that were dropped by the longer chain). A blockchain can also fork when developers change rules in the software used to determine which transactions are valid.[10]

Bitcoin Cash and Bitcoin Gold are examples of hardforks of bitcoin. As per CoinDesk, a hard fork is a change of rules that allows creating new blocks not considered valid by the older software.[10] As per Investopedia, a hard fork is a situation where a blockchain splits into two separate chains as a consequence of two distinct sets of rules trying to govern the system.[11]

Bitcoin XT and Bitcoin Classic both supported an increase to the maximum block size through a hard fork, as a method to improve scalability. Support for both proposals eventually fell over time.[12] Bitcoin Unlimited supports a variable block size limit, which may result in a hard fork.[9] A hard fork can split a network if all the network participants don't follow the fork.

In contrast to a hard fork, a soft fork is a change of rules that creates blocks recognized as valid by the old software, i.e. it is backwards-compatible.[10] Per CoinDesk, a soft fork can also split the network when non-upgraded software creates blocks not considered valid by the new rules.[10] A user-activated soft fork (UASF) is a controversial idea that explores how to perform a blockchain upgrade that is not supported by those who provide the network's hashing power.[10]

Various proposals for scaling bitcoin have been presented. In 2015, BIP 100 by Jeff Garzik and BIP 101 by Gavin Andresen were introduced.[13] By mid-2015, some developers were supporting a block size limit of as high as eight megabytes.[14]

Segregated witness makes a number of changes to the protocol. It changes how data is stored in each bitcoin block.[30] SegWit provides a boost in transaction capacity while remaining compatible with earlier versions of bitcoin software.[30] It fixes transaction malleability that has been a roadblock for other bitcoin projects.[30] SegWit allows for an easier implementation of the Lightning Network.[31]

Solutions such as the lightning network and Tumblebit have been proposed to operate on top of the bitcoin network to allow payments to be effected that are not immediately put on the blockchain.[32]

The Lightning Network is an in-development project that aims to fix the bitcoin scalability. Lightning Network will require putting a funding transaction on the blockchain to open a channel.[33] Payment provider Bitrefill tweeted in December 2017 claiming it was the first lightning transaction operating on the bitcoin network.[34] In January 2018 Blockstream launched a payment processing system for web retailers called "Lightning Charge," and noted that lightning was live on mainnet with 60 nodes operating as of January 18, 2018, and advised it should still be considered "in testing."[35][36]

Retrieved from "https://tme.miraheze.org/w/index.php?title=Bitcoin_scalability_problem&oldid=33938"
Categories:
Hidden categories:
Cookies help us deliver our services. By using our services, you agree to our use of cookies.