The Australia and New Zealand Banking Group Limited, commonly called ANZ, is the third largest bank by market capitalisation in Australia, after the Commonwealth Bank and Westpac Banking Corporation.[2] Australian operations make up the largest part of ANZ's business, with commercial and retail banking dominating. ANZ is also the largest bank in New Zealand, where the legal entity became known as ANZ National Bank Limited in 2003 and changed to ANZ Bank New Zealand Limited in 2012. From 2003 to 2012, it operated two brands in New Zealand, ANZ and the National Bank of New Zealand. The National Bank brand was retired in 2012, with a number of branches closing and others converting to ANZ branches.[3]

In addition to operations throughout Australia and New Zealand, ANZ also operates in 34 other nations.[4]

ANZ was named the most sustainable bank globally in the 2008 Dow Jones Sustainability Index making it the 2nd year in a row ANZ has been granted the title. In 2007 the title was shared with another Australian bank, Westpac, which had held the title for the previous five years.[5]

ANZ World Headquarters. Designed by Peddle Thorp Architects, the building is affectionately known as Gothic Tower due to its architecture. Queen Street, Melbourne.

ANZ is one of the leading Australian banks in the Asia-Pacific region. It has been aggressive in its expansion into the emerging markets of China, Vietnam and Indonesia. ANZ is also a leading bank in New Zealand as well as several Pacific Island Nation where it competes in many markets with fellow Australian bank Westpac. ANZ's arm in New Zealand is operated through a subsidiary company, ANZ National Bank, from 2003 to 2012, when it changed to ANZ Bank New Zealand upon merging the ANZ and National Bank brands.

In March 2005, it formed a strategic alliance with Vietnam's Sacombank involving an acquisition of 10% of Sacombank’s share capital. As part of the strategic alliance, ANZ will provide technical assistance in the areas of risk management and retail and small business banking.

In August 2009, ANZ purchased RBS's retail units in Taiwan, Singapore, Indonesia and Hong Kong, as well as RBS'si banking businesses in Taiwan, the Philippines and Vietnam. It was purchased for the price of A$687 million.

In 2016, ANZ adopted less aggressive approach to expansion in the Asia-Pacific region after low returns.[26][27][28] At the end of October 2016 ANZ announced the sale of its Asian retail and wealth management operations to the Development Bank of Singapore; ANZ also signalled a withdrawal from its "Asian pivot".[29]

ANZ have been progressively increasing work output from offshore offices. ANZ's Bangalore office has been operational since 1989, making it one of the first organisations to employ IT staff based in India. ANZ employs around 4,800 staff in Bangalore, India.[30] 1500 IT positions, 2000 positions in Payments and Institutional Operations and International and High Value Services and 1300 positions in Operations Personal Banking have been shifted from Melbourne to India. In 2006, ANZ predicted that by 2010, over 2000 jobs would have been shifted from Australia to Bangalore.[31] In 2012, ANZ transferred 360 permanent staffs from Melbourne and Bangalore to Capgemini. All these staff worked in the Technology Testing and Environment Space.[citation needed] As ANZ CIO Anne announced earlier that ANZ want a Hybrid model of technology in order to achieve the 2017 Technology roadmap.

In 2005, an advertisement included two famous robots: Lost in Space robot, and a Dalek from Doctor Who, although the Dalek was replaced in subsequent versions of the ad. In 2006, the company started a TV campaign with a series of ads featuring their new mascot - the Falcon, a bird trained to stop credit card thieves, illustrating the company's measures in prevention of credit card fraud. In 2010, ANZ ran an ad campaign parodying common banking scenarios with a fictional character known as 'Barbara who lives in Bank World', a middle-aged, rude, sarcastic and unhelpful bank manager. The adverts have received acclaim for wit and humour, but also criticism for stereotyping bank managers. Barbara is portrayed by Australian comedian Genevieve Morris.[32]In 2010, ANZ spent $195m in Australia on advertising.[33]

In 2011, a series of ads were fronted by Simon Baker, the star of the American television show The Mentalist. According to a 2014 top 20 list of advertising spends, ANZ was in the top 20.[34] 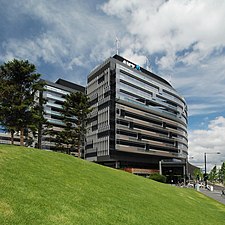 ANZ's head office was inaugurated in 2009

In September 2006, plans were unveiled for ANZ's new world headquarters to be located in Melbourne's Docklands precinct. The complex features a vast low rise office building, shops, car and bicycle parking facilities. The new complex will enable 6,500 ANZ staff to work in one integrated area, however the company will maintain its flagship building, 100 Queen Street Melbourne. The new headquarters is the largest office complex in Australia at 84,500 m² NLA, 130,000 sqm GFA and an accredited 6 Green Star Building. Construction commenced in late 2006 and the building opened in late 2009. The building is located at 833 Collins Street. It has been designed by HASSELL & Lend Lease Design - fronting the Yarra River.

The building was one of the winners at the 2010 World Architecture Festival in the category "Interiors and Fit Out of the Year".[39]

ANZ announced in 2016 that it would be selling its old Melbourne headquarters.[40] The old bank building, fronting Collins Street, in Melbourne, was purpose built as the head office of the English, Scottish & Australian Bank (an ANZ predecessor) from 1883-87.[40]

In 2016, ANZ and 10 of its traders were named as being the subject of legal proceedings for manipulation of the benchmark inter-bank interest rates in Australia; specifically ASIC has made claims of unconscionable conduct and manipulation against ANZ.[41][42][43] ANZ has attempted to deny the claims and says it will defend the claim in court.[44] Formal filings of the originating process in this regards were made against ANZ on 4 March 2016.[45] Since that time ASIC has compounded their claim against the ANZ.[46] In a separate court appearance in November 2016 ANZ admitted to 10 instances of attempted cartel conduct regarding alleged manipulation of the Malaysian ringgit.[47] The wider market rigging case has been reported as likely lastining into 2018.[48]

ANZ has been the subject of claims that it has backed agriculture and timber companies that engage in so called 'land grabs'.[49][50] In 2014, ANZ faced allegations that it funded a Cambodian sugar plantation that has involved child labour, military-backed land grabs, forced evictions and food shortages.[51][52]

ANZ has also been criticised in the Senate for its allegedly "hard boiled" approach to farmers exposed to the fallout from ANZ's purchase of the Landmark loan book.[53][54] One submission to the Senate inquiry into bank conduct mentioned one farmer self-immolating himself after alleged defaults occurring.[55] Another former customer in the Senate inquiry was mentioned as being subjected to victimisation by receivers and police, including use of SWAT teams and being held at gun-point.[55] In 2016 it was reported that ANZ was accused of racism in a high-profile court case involving the businessman Pankaj Oswal and his wife;[56] specifically it was reported that an email contained comments stating that, "“We are dealing with Indians with no moral compass and an Indian woman [the wife of Mr. Oswal], as every bit as devious as PO (Pankaj Oswal),” and “This has been a very Indian characteristic transaction."[56][57] The ANZ agreed to a settlement for an undisclosed amount in respect of the legal claim made by the Oswals.[58]

ANZ CEO Shayne Elliott admitted in 2016 that "culture" will be one of the biggest challenges for ANZ.[59] Media reports have included allegations of sexism, drug use and bravado culture.[60] In 2016, ANZ was pursued in court over its suggesting on social media that criticism of the bank’s chief financial officer might have been sexist, which resulted in the broker at Bell Potter losing his job.[61][62] Former ANZ director John Dahlsen in 2016 admitted that there are issues with bank culture and competition.[63] In November 2016, there were further claims of sexist conduct and a separate lawsuit was filed against ANZ in the United States regarding staff at its New York office.[64][65]

In early 2016, ANZ was also mentioned in a scandal in Malaysia involving one of ANZ's subsidiaries and the Malaysian leader.[66] The incident has raised questions for ANZ.[67] ANZ admitted in November 2016 that it had little ability to control its affiliate.[68]

ANZ has continued to out-source jobs in countries other than Australia and this has caused some controversy with some outlets.[72]

Despite the ANZ taking advantage of block-chain technology[73] the ANZ had blocked businesses making use of bitcoin. The ANZ was investigated by the Australian Competition and Consumer Commission and was cleared of colluding with other banks on the issue of bitcoin based business.[74] A number of prominent Senators[who?] have called the investigation into question and continue to criticise the conduct of ANZ and other large banks on this matter.[citation needed]

ANZ was reported as appearing in 7,548 of the Mossack Fonseca documents in the Panama Papers, reflecting the bank's extensive work in New Zealand, the Cook Islands, Samoa and Jersey.[75]

Retrieved from "https://tme.miraheze.org/w/index.php?title=Australia_and_New_Zealand_Banking_Group&oldid=26955"
Categories:
Hidden categories:
Cookies help us deliver our services. By using our services, you agree to our use of cookies.