From The Multilingual Encyclopedia
Jump to navigation Jump to search
"Australia Plate" redirects here. For the continental plates, see Australian Plate and Indo-Australian Plate.
Not to be confused with Oceania or Australasia.

Australia, sometimes known in technical contexts by the names Sahul, Australinea or Meganesia, to distinguish it from the Australian mainland, is a continent comprising mainland Australia, Tasmania, New Guinea, Seram, possibly Timor, and neighbouring islands.

It is the smallest of the seven traditional continents in the English conception. The continent lies on a continental shelf overlain by shallow seas which divide it into several landmasses—the Arafura Sea and Torres Strait between mainland Australia and New Guinea, and Bass Strait between mainland Australia and Tasmania. When sea levels were lower during the Pleistocene ice age, including the Last Glacial Maximum about 18,000 BC, they were connected by dry land. During the past 10,000 years, rising sea levels overflowed the lowlands and separated the continent into today's low-lying arid to semi-arid mainland and the two mountainous islands of New Guinea and Tasmania. Geologically, a continent extends to the edge of its continental shelf, so the now-separate islands are considered part of the continent.[1] Due to the spread of animals, fungi and plants across the single Pleistocene landmass the separate lands have a related biota.

New Zealand is not part of the continent of Australia, but of the separate, submerged continent of Zealandia.[2] New Zealand and Australia are both part of the wider regions known as Australasia and Oceania. The term Oceania is often used to denote the region encompassing the Australian continent and various islands in the Pacific Ocean that are not included in the seven-continent model. 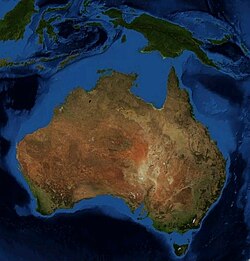 Mainland Australia showing the continental Sahul Shelf (light blue) extending to the islands of New Guinea in the north, the island of Timor in the northwest, and Tasmania in the south

With a total land area of 8.56 million square kilometres (3,310,000 sq mi), the Australian continent is the smallest and lowest human inhabited continent on Earth.[3] The continental shelf connecting the islands, half of which is less than 50 metres (160 ft) deep, covers some 2.5 million square kilometres (970,000 sq mi), including the Sahul Shelf[4][5] and Bass Strait. As the country of Australia is mostly on a single landmass, and comprises most of the continent, it is sometimes informally referred to as an island continent, surrounded by oceans.[6] 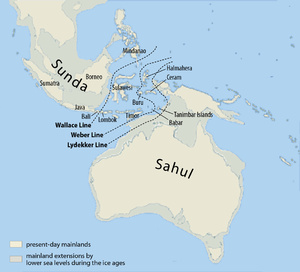 Archaeological terminology for this region has changed repeatedly. Prior to the 1970s, the single Pleistocene landmass was called Australasia,[7] derived from the Latin australis, meaning "southern", although this word is most often used for a wider region that includes lands like New Zealand that are not on the same continental shelf. In the early 1970s, the term Greater Australia was introduced for the Pleistocene continent.[7] Then at a 1975 conference and consequent publication,[8] the name Sahul was extended from its previous use for just the Sahul Shelf to cover the continent.[7]

In 1984 W. Filewood suggested the name Meganesia, meaning "great island" or "great island-group", for both the Pleistocene continent and the present-day lands,[9] and this name has been widely accepted by biologists.[10] Others have used Meganesia with different meanings: travel writer Paul Theroux included New Zealand in his definition[11] and others have used it for Australia, New Zealand and Hawaii.[12] Another biologist, Richard Dawkins, coined the name Australinea in 2004.[13] Australia-New Guinea has also been used.[14]

The continent primarily sits on the Indo-Australian Plate. Because of its central location on its tectonic plate Australia doesn't have any active volcanic regions, the only continent with this distinction.[15] The lands were joined with Antarctica as part of the southern supercontinent Gondwana until the plate began to drift north about 96 million years ago. For most of the time since then, Australia–New Guinea remained a continuous landmass. When the last glacial period ended in about 10,000 BC, rising sea levels formed Bass Strait, separating Tasmania from the mainland. Then between about 8,000 and 6,500 BC, the lowlands in the north were flooded by the sea, separating New Guinea, the Aru Islands, and the Australian mainland.

A northern arc consisting of the New Guinea Highlands, the Raja Ampat Islands, and Halmahera was uplifted by the northward migration of Australia and subduction of the Pacific Plate. The Outer Banda Arc was accreted along the northwestern edge the continent; it includes the islands of Timor, Tanimbar, and Seram.[16]

As the continent drifted north from Antarctica, a unique fauna, flora and mycobiota developed. Marsupials and monotremes also existed on other continents, but only in Australia–New Guinea did they out-compete the placental mammals and come to dominate. Bird life also flourished — in particular, the songbirds (order Passeriformes, suborder Passeri) are thought to have evolved 50 million years ago in the part of Gondwana that later became Australia, New Zealand, New Guinea, and Antarctica, before radiating into a great number of different forms and then spreading around the globe.[17] Among the fungi, the remarkable association between Cyttaria gunnii (one of the "golf-ball" fungi) and its associated trees in the genus Nothofagus is evidence of that drift: the only other places where this association is known are New Zealand and southern Argentina and Chile.[18]

Animal groups such as macropods, monotremes, and cassowaries are endemic to Australia. There were three main reasons for the enormous diversity that developed in animal, fungal and plant life.

For about 40 million years Australia–New Guinea was almost completely isolated. During this time, the continent experienced numerous changes in climate, but the overall trend was towards greater aridity. When South America eventually separated from Antarctica, the development of the cold Antarctic Circumpolar Current changed weather patterns across the world. For Australia–New Guinea, it brought a marked intensification of the drying trend. The great inland seas and lakes dried out. Much of the long-established broad-leaf deciduous forest began to give way to the distinctive hard-leaved sclerophyllous plants that characterise the modern Australian landscape.

For many species, the primary refuge was the relatively cool and well-watered Great Dividing Range. Even today, pockets of remnant vegetation remain in the cool uplands, some species not much changed from the Gondwanan forms of 60 or 90 million years ago.

Eventually, the Australia–New Guinea tectonic plate collided with the Eurasian plate to the north. The collision caused the northern part of the continent to buckle upwards, forming the high and rugged mountains of New Guinea and, by reverse (downwards) buckling, the Torres Strait that now separates the two main landmasses. The collision also pushed up the islands of Wallacea, which served as island 'stepping-stones' that allowed plants from Southeast Asia's rainforests to colonise New Guinea, and some plants from Australia–New Guinea to move into Southeast Asia. The ocean straits between the islands were narrow enough to allow plant dispersal, but served as an effective barrier to exchange of land mammals between Australia–New Guinea and Asia.

Although New Guinea is the most northerly part of the continent, and could be expected to be the most tropical in climate, the altitude of the New Guinea highlands is such that a great many animals and plants that were once common across Australia–New Guinea now survive only in the tropical highlands where they are severely threatened by overpopulation pressures.

Humans first populated eastern Wallacea (including Timor, which at the time was separated from mainland Sahul), the rest of Sahul, and the Bismarck Archipelago from Sunda around 45,000 years ago, by a founding population estimated to have been at least several hundred, and having had relatively sophisticated water craft.[19] There was little subsequent population mixing between Wallacea and Sahul for about 30,000 years, and indeed relatively little mixing between the north and south and the east and west of Sahul after the initial dispersal of the population.

Retrieved from "https://tme.miraheze.org/w/index.php?title=Australia_(continent)&oldid=14496"
Categories:
Hidden categories:
Cookies help us deliver our services. By using our services, you agree to our use of cookies.