Depiction of harvesting in the August calendar page of the Queen Mary Psalter (fol. 78v), ca. 1310.

August is the eighth month of the year in the Julian and Gregorian calendars, falling between July and September, and the fifth month to have the length of 31 days.[1] It was originally named Sextilis in Latin because it was the sixth month in the original ten-month Roman calendar under Romulus in 753 BC, and March was the first month of the year. About 700 BC, it became the eighth month when January and February were added to the year before March by King Numa Pompilius, who also gave it 29 days. Julius Caesar added two days when he created the Julian calendar in 45 BC, giving it its modern length of 31 days. In 8 BC, it was renamed in honor of Augustus. According to a Senatus consultum quoted by Macrobius, he chose this month because it was the time of several of his great triumphs, including the conquest of Egypt.[2] 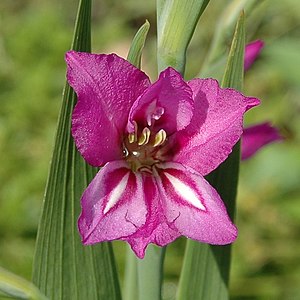 Sunday on or closest to August 9: August 6[edit | edit source]

Retrieved from "https://tme.miraheze.org/w/index.php?title=August&oldid=21046"
Categories:
Hidden categories:
Cookies help us deliver our services. By using our services, you agree to our use of cookies.