Attack of the Show!

From The Multilingual Encyclopedia
Jump to navigation Jump to search
"AOTS" redirects here. AOTS may also refer to Association for Overseas Technical Scholarship.

On October 26, 2012 G4 canceled Attack of the Show! due to low ratings, five months after Kevin Pereira canceled his contract. The series taped its final scenes on December 21, 2012, and its final episode was broadcast January 23, 2013.

Munn and Pereira on a panel for Attack of the Show! at the 2008 Comic Con in San Diego, California.

Host Kevin Rose left the G4 Network and AOTS on May 22, 2005 (2005-05-22). The show announced a search for a new host among the show's audience, and for several months various candidates auditioned on the air. In the end none of the candidates were actually selected, although this was never actually announced on the air. Sarah Lane, who had previously been a co-host and segment contributor, gradually became the show's official host alongside Kevin Pereira. She continued in this capacity until April 6, 2006 (2006-04-06), when she and Brendan Moran announced their engagement and stated that they would be leaving the show.[5] The Morans appeared on the show, via satellite, on July 13, 2006 (2006-07-13), to talk about their adventures.

AOTS has also featured Chris Hardwick, Chris Gore, and Blair Herter in the occasional absence of Kevin Pereira. In addition to the interim cohosts, Grace Helbig has also filled in for Candace Bailey. 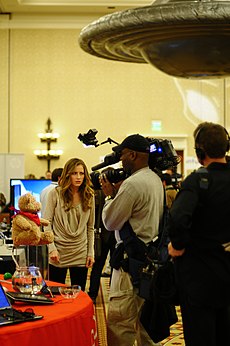 Candace Bailey in the production of an Attack of the Show! episode in January 2011. 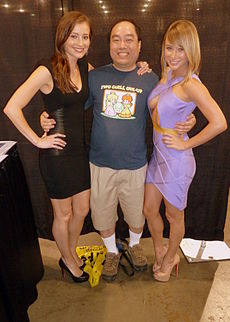 Candace Bailey and Sara Jean Underwood with a fan

On May 9, 2012 (2012-05-09), Kevin Pereira announced on-air that he was officially leaving AOTS to pursue work in television production. He stated, "I plan to turn my attention to full-time with my production company Super Creative and live touring nerd-carnival leetUP." His last day on AOTS was May 31.[7] Beginning August 28, 2012 (2012-08-28), the show debuted a final new opening credit, with no reference to permanent or guest hosts. Kevin Pereira himself hosted the game show Let's Ask America since the September 17, 2012 series debut. On October 26, 2012 (2012-10-26) G4 announced that they would not renew AOTS at the end of the year, as part of an eventual rebranding of the channel itself.

On January 23, 2013 (2013-01-23), Attack of the Show! televised its final original episode on G4. After a brief montage of clips from AOTS history and final goodbyes from the show's hosts and staff, the series ended with former Screen Savers hosts Patrick Norton and Leo Laporte in a coffee shop, acting as if the entire run of AOTS had been a dream. They then don "rocket packs" and fly off to work in a skyscraper adorned with the old TechTV logo, as the Screen Savers theme plays one last time and the G4 Media copyright box appears in the bottom left corner of the screen. Afterwards, text came up on the screen against a gray background that read, "To our fans, our haters, and the Internet, thanks for seven kick-ass years. TTYL, Attack of the Show," with the Attack of the Show theme playing at the end.[8]

Some of the video clips of the show can still be seen on YouTube[9] though their YouTube account is no longer visible. A video archive is still available at the official Attack of the Show webpage.

Retrieved from "https://tme.miraheze.org/w/index.php?title=Attack_of_the_Show!&oldid=11394"
Categories:
Hidden categories:
Cookies help us deliver our services. By using our services, you agree to our use of cookies.