From The Multilingual Encyclopedia
(Redirected from Atari, Inc)
Jump to navigation Jump to search
For information on the Atari brand and its history, see Atari.
For the current brand name, see Atari, Inc. (Atari, SA subsidiary).

Atari, Inc. was an American video game developer and home computer company founded in 1972 by Nolan Bushnell and Ted Dabney.[1] Primarily responsible for the formation of the video arcade and modern video game industries, the company was closed and its assets split in 1984 as a direct result of the North American video game crash of 1983.

Computer Space did not fare well commercially when it was placed in Nutting's customary market, bars. Feeling that the game was simply too complex for the average customer unfamiliar and unsure with the new technology, Bushnell started looking for new ideas.[2] 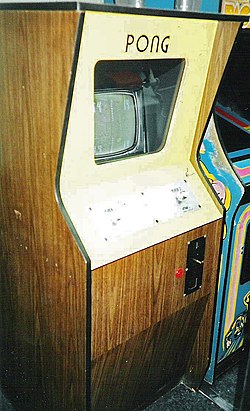 Bushnell and Ted Dabney left Nutting to form their own engineering firm, Syzygy Engineering,[3] and soon hired Al Alcorn as their first design engineer. Initially wanting to start Syzygy off with a driving game, Bushnell had concerns that it might be too complicated for the young Alcorn's first game.[2] In May 1972, Bushnell had seen a demonstration of the Magnavox Odyssey, which included a tennis game. According to Alcorn, Bushnell decided to have him produce an arcade version of the Odyssey's Tennis game,[4][5][6] which would go on to be named Pong. Atari later had to pay Magnavox a licensing fee after the latter sued Atari because of this.[7][8]

When they went to incorporate their firm that June, they soon found that Syzygy (an astronomical term) already existed in California. Bushnell wrote down several words from the game Go, eventually choosing atari, a term that in the context of the game means a state where a stone or group of stones is imminently in danger of being taken by one's opponent. Atari was incorporated in the state of California on June 27, 1972.[9]

By August 1972, the first Pong was completed. It consisted of a black and white television from Walgreens, the special game hardware, and a coin mechanism from a laundromat on the side which featured a milk carton inside to catch coins. It was placed in a Sunnyvale tavern by the name of Andy Capp's to test its viability.[10]

When the game begun malfunctioning a few days later and Alcorn returned to fix the machine, he was met by a lineup of people waiting for the bar to open so they could play the game. On examination, the problem turned out to be mundane; the coin collector was filled to overflowing with quarters, and when customers tried to jam them in anyway, the mechanism shorted out.[citation needed]

After talks to release Pong through Nutting and several other companies broke down, Bushnell and his partner Ted Dabney decided to release Pong on their own,[2] and Atari, Inc. was established as a coin-op design and production company. 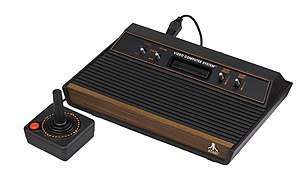 In 1973, Atari secretly spawned a "competitor" called Kee Games, headed by Bushnell's next door neighbor Joe Keenan, to circumvent pinball distributors' insistence on exclusive distribution deals; both Atari and Kee could market (virtually) the same game to different distributors, with each getting an "exclusive" deal. Though Kee's relationship to Atari was discovered in 1974, Joe Keenan did such a good job managing the subsidiary that he was promoted to president of Atari that same year.

In 1975, Bushnell started an effort to produce a flexible video game console that was capable of playing all four of Atari's then-current games. Development took place at an offshoot engineering lab, which initially had serious difficulties trying to produce such a machine. However, in early 1976 the now-famous MOS Technology 6502 was released, and for the first time the team had a CPU with both the high-performance and low-cost needed to meet their needs. The result was the Atari 2600, released in October 1977 as the "Video Computer System", one of the most successful consoles in history.

As a subsidiary of Warner Communications[edit | edit source]

Bushnell knew he had another potential hit on his hands, but bringing the machine to market would be extremely expensive. In 1976 Bushnell sold Atari to Warner Communications for an estimated $28 – $32 million, using part of the money to buy the Folgers Mansion. He departed from the division in 1979. 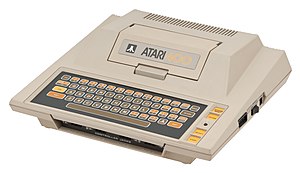 A project to design a successor to the 2600 started as soon as the system shipped. The original development team estimated the 2600 had a lifespan of about three years, and decided to build the most powerful machine they could given that time frame. By the middle of the effort's time-frame the home computer revolution was taking off, so the new machines were adapted with the addition of a keyboard and various inputs to produce the Atari 800, and its smaller cousin, the 400. Although a variety of issues made them less attractive than the Apple II for some users, the new machines had some level of success when they finally became available in quantity in 1980.

While part of Warner, Atari achieved its greatest success, selling millions of 2600s and computers. At its peak, Atari accounted for a third of Warner's annual income and was the fastest-growing company in the history of the United States at the time.

Although the 2600 had garnered the lion's share of the home video game market, it experienced its first stiff competition in 1980 from Mattel's Intellivision, which featured ads touting its superior graphics capabilities relative to the 2600. Still, the 2600 remained the industry standard-bearer, because of its market superiority, and because of Atari featuring (by far) the greatest variety of game titles available.

However, Atari ran into problems in the early 1980s. Its home computer, video game console, and arcade divisions operated independently of one another and rarely cooperated.[11] Having grown to exceed the arcade division's sales, the game division viewed computers as a threat,[12] but by 1983 the computer division was losing a price war with Commodore International.[13] The company had a poor reputation in the industry. One dealer told InfoWorld in early 1984 that "It has totally ruined my business ... Atari has ruined all the independents." A non-Atari executive stated:[14]

“There were so many screaming, shouting, threatening dialogues, it's unbelievable that any company in America could conduct itself the way Atari conducted itself. Atari used threats, intimidation and bullying. It's incredible that anything could be accomplished. Many people left Atari. There was incredible belittling and humiliation of people. We'll never do business with them again.”

Stating that "Atari has never made a dime in microcomputers", John J. Anderson wrote in early 1984:[12]

“Many of the people I spoke to at Atari between 1980 and 1983 had little or no idea what the products they were selling were all about, or who if anyone would care. In one case, we were fed mis- and disinformation on a frighteningly regular basis, from a highly-placed someone supposedly in charge of all publicity concerning the computer systems. And chilling as the individual happenstance was, it seems to have been endemic at Atari at the time.”

Because of fierce competition and price wars in the game console and home computer markets, Atari was never able to duplicate the success of the 2600.

These problems were followed by the video game crash of 1983, which caused losses that totaled more than $500 million. Warner's stock price slid from $60 to $20, and the company began searching for a buyer for Atari.[17] When Texas Instruments exited the home-computer market in November 1983 because of the price war with Commodore, many believed that Atari would be next.[14][13]

Atari was still the number one console maker in every market except Japan. Nintendo, a Japanese video game company, planned to release its first programmable video game console, the Famicom (later known to the rest of the world as the NES), in 1983. Looking to sell the console in international markets, Nintendo offered a licensing deal whereby Atari would build and sell the system, paying Nintendo a royalty. The deal was in the works throughout 1983,[18] and the two companies tentatively decided to sign the agreement at the June, 1983 CES. However, Coleco demonstrated its new Adam computer with Nintendo's Donkey Kong. Kassar was furious, as Atari owned the rights to publish Donkey Kong for computers, which he accused Nintendo of violating. Nintendo, in turn, criticized Coleco, which only owned the console rights to the game.[19] Coleco had legal grounds to challenge the claim though since Atari had only purchased the floppy disk rights to the game, while the Adam version was cartridge-based.[20] Ray Kassar was soon forced to leave Atari, executives involved in the Famicom deal were forced to start over again, and the deal failed.

James J. Morgan was appointed as Kassar's replacement on Labor Day 1983.[14] Stating "one company can't have seven presidents", he stated a goal of more closely integrating the company's divisions to end "the fiefdoms and the politics and all the things that caused the problems".[11] Morgan had less than a year to try to fix the company's problems before he too was gone. In July 1984, Warner sold the home computing and game console divisions of Atari to Jack Tramiel, the recently ousted founder of Commodore, under the name Atari Corporation for $240 million in stocks under the new company. Warner retained the arcade division, continuing it under the name Atari Games and eventually selling it to Namco in 1985. Warner also sold Ataritel to Mitsubishi.

Retrieved from "https://tme.miraheze.org/w/index.php?title=Atari,_Inc.&oldid=2437"
Categories:
Hidden categories:
Cookies help us deliver our services. By using our services, you agree to our use of cookies.