From The Multilingual Encyclopedia
Jump to navigation Jump to search
This article is about the corporate brand. For other uses, see Atari (disambiguation).

Atari is a corporate and brand name owned by several entities since its inception in 1972, currently by Atari Interactive, a subsidiary of the French publisher Atari, SA (ASA).[1][2][3] The original Atari, Inc. founded in 1972 by Nolan Bushnell and Ted Dabney was a pioneer in arcade games, home video game consoles, and home computers. The company's products, such as Pong and the Atari 2600, helped define the electronic entertainment industry from the 1970s to the mid-1980s.

In 1984, the original Atari Inc. was split due to its role in the video game crash of 1983, and the arcade division was turned into Atari Games Inc.[4] Atari Games received the rights to use the logo and brand name with appended text "Games" on arcade games, as well as rights to the original 1972–1984 arcade hardware properties. The Atari Consumer Electronics Division properties were in turn sold to Jack Tramiel's Tramel Technology Ltd., which then renamed itself to Atari Corporation.[5][6] In 1996, Atari Corporation reverse-merged with disk-drive manufacturer JT Storage (JTS),[7] becoming a division within the company.

In 1971, Nolan Bushnell and Ted Dabney founded an engineering firm, Syzygy Engineering,[14] that designed and built Computer Space, the world's first arcade video game, for Nutting Associates. On June 27, 1972 Atari, Inc. was incorporated and soon hired Al Alcorn as their first design engineer. Bushnell decided to have Alcorn produce as a test of his abilities, an arcade version of the Magnavox Odyssey's Tennis game,[15] which would be named Pong. While Bushnell incorporated Atari in June 1972, Syzygy Company was never formally incorporated. Before Atari's official incorporation, Bushnell wrote down several words from the game go, eventually choosing atari, a term which in the context of the game means a state where a stone or group of stones is imminently in danger of being taken by one's opponent. Atari was incorporated in the state of California on June 27, 1972.[16]

In 1973, Atari secretly spawned a "competitor" called Kee Games, headed by Nolan's next door neighbor Joe Keenan, to circumvent pinball distributors' insistence on exclusive distribution deals; both Atari and Kee could market virtually the same game to different distributors, with each getting an "exclusive" deal. Though Kee's relationship to Atari was discovered in 1974, Joe Keenan's management of the subsidiary led to him being promoted president of Atari that same year.[17]

In 1976, Bushnell, through a Grass Valley, CA. engineering firm—Cyan Engineering, started an effort to produce a flexible video game console that was capable of playing all four of Atari's then-current games. The result was the Atari Video Computer System, or "VCS" (Later renamed the Atari 2600 when the Atari 5200 was released). The initial release of the VCS cost $199 and included a console unit, two joysticks, a single pair of paddles, and the Combat cartridge.[18] Bushnell knew he had another potential hit on his hands, but bringing the machine to market would be extremely expensive. Looking for outside investors, in 1976 Bushnell sold Atari to Warner Communications for an estimated $28–32 million, using part of the money to buy the Folgers Mansion. Nolan continued to have disagreements with Warner Management over the direction of the company, the discontinuing of the Pinball division and most importantly, he felt that the Atari 2600 should be discontinued. In 1978, the Kee Games brand was dropped.[19] In December of that year during a heated argument between Nolan Bushnell and Manny Gerard, Bushnell was fired. "[W]e started fighting like cats and dogs. And then the wheels came off that fall. Warner claimed they fired me," recalled Bushnell. "I say I quit. It was a mutual separation."[20]

A project to design a successor to the 2600 started as soon as the system shipped. The original development team estimated the 2600 had a lifespan of about three years, and decided to build the most powerful machine they could, given that time frame. Mid-way into the effort's time-frame, the home computer revolution was taking off, so the new machines were adapted, with the addition of a keyboard and various inputs, to produce the Atari 800, and its smaller cousin, the 400. Although a variety of issues made them less attractive than the Apple II for some users, the new machines had some success when they finally became available in quantity in 1980. In 1982, the Atari 5200 was released, based heavily on the 400 and 800 models, but without a keyboard. The 5200 was unsuccessful, due to a lack of backwards compatibility with the 2600 library, a small amount of games, and notoriously-unreliable controllers.

Under Warner and the Chairman and CEO they chose to run Atari, Raymond Kassar, Atari Inc. achieved its greatest success, selling millions of 2600s and computers. At its peak, Atari accounted for a third of Warner's annual income and was the fastest-growing company in the history of the United States at the time. However, Atari Inc. ran into problems in the early 1980s as interference from the New York-based Warner management increasingly affected daily operations. Its home computer, video game console, and arcade divisions operated independently of one another and rarely cooperated. Faced with fierce competition and price wars in the game console and home computer markets, Atari was never able to duplicate the success of the 2600.

These problems were followed by the video game crash of 1983, with losses that totaled more than $500 million. Warner's stock price slid from $60 to $20, and the company began searching for a buyer for its troubled division. In 1983, Ray Kassar was forced to resign, and executives involved in the Famicom lost track of the negotiations, and the deal eventually died. With Atari's further financial problems and the Famicom's runaway success in Japan after its July 16, 1983 release date, Nintendo decided to go at it alone.

Financial problems continued to mount and Kassar's successor, James J. Morgan, had less than a year in which to tackle the company's problems, he began a massive restructuring of the company and worked with Warner Communications in May 1984 to create "NATCO" which stood for New Atari Company which would further lean the company facilities, personnel and spending and make the company profit. Unknown to James Morgan and the senior management of Atari, Warner had been in talks with Tramel Technology to buy Atari's Consumer electronics and Home Computer divisions. Negotiating up until close to midnight of July 1, 1984 Jack Tramiel purchased Atari. Warner sold the home computing and game console divisions of Atari to Tramiel for $50 cash and $240 million in promissory notes and stocks, giving Warner a 20% stake in Atari Corporation[21] who then used it to create a new company under the name Atari Corporation. Warner retained the arcade division, continuing it under the name Atari Games, but sold it to Namco in 1985. Warner also sold the fledgling Ataritel to Mitsubishi.

The Atari logo was designed by George Opperman who was Atari's first in-house graphic designer. The design is known as "Fuji" for its resemblance to the Japanese mountain, although the design's origins are unrelated to it. Opperman designed the logo intending for the silhouette to look like the letter A as in Atari, and for its three "prongs" to resemble players and the midline of the "court" in company's first hit game, Pong.[22] 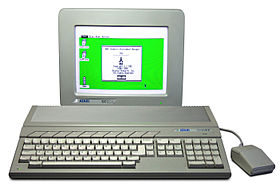 In 1987, Atari acquired Federated Group for $67.3 million, securing shelf space in over 60 stores in California, Arizona, Texas and Kansas[23] at a time when major American electronics outlets were reluctant to carry Atari-branded computers, and two-thirds of Atari's PC production was sold in Europe.[24] The Federated Group (not related to Federated Department Stores) was sold to Silo in 1989.[25]

In 1989, Atari released the Atari Lynx, a handheld console with color graphics, to much fanfare. A shortage of parts kept the system from being released nationwide for the 1989 Christmas season, and the Lynx lost market share to Nintendo's Game Boy which, despite only having a black and white display, was cheaper, had better battery life and had much higher availability. Tramiel emphasized computers over game consoles but Atari's proprietary computer architecture and operating system fell victim to the success of the Wintel platform while the game market revived. In 1989, Atari Corp. sued Nintendo for $250 million, alleging it had an illegal monopoly.[26] Atari eventually lost the case when it was rejected by a US district court in 1992.[27]

In 1993, Atari positioned its Jaguar as the only 64-bit interactive media entertainment system available, but it sold poorly. It would be the last home console to be produced by Atari and the last to be produced by an American manufacturer until Microsoft's introduction of the Xbox in 2001.

By 1996, a series of successful lawsuits[28] had left Atari with millions of dollars in the bank, but the failure of the Lynx and Jaguar left Atari without a product to sell. Tramiel and his family also wanted out of the business. The result was a rapid succession of changes in ownership. In July 1996, Atari merged with JTS Inc., a short-lived maker of hard disk drives, to form JTS Corp.[29][30][31][32] Atari's role in the new company largely became that of holder for the Atari properties and minor support, and consequently the name largely disappeared from the market.

In March 1998, JTS sold the Atari name and assets to Hasbro Interactive for $5 million—less than a fifth of what Warner Communications had paid 22 years earlier.[33] This transaction primarily involved the brand and intellectual property, which now fell under the Atari Interactive division of Hasbro Interactive. The brand name changed hands again in December 2000 when French software publisher Infogrames took over Hasbro Interactive.[34]

In October 2001, Infogrames (now Atari, SA) announced that it was "reinventing" the Atari brand with the launch of two new games featuring a prominent Atari branding on their boxarts: Splashdown and MX Rider.[35] On May 7, 2003, Infogrames had its majority-owned, but discrete US subsidiary Infogrames NA officially renamed Atari, Inc.,[36] renamed its European operations to Atari Europe but kept the original name of the main company Infogrames Entertainment. The original Atari holdings division purchased from Hasbro, Hasbro Interactive, was also made a separate corporate entity renamed as Atari Interactive.

On December 9, 2008, Atari announced that it had acquired Cryptic Studios, a MMORPG developer.[42]

Namco Bandai has purchased a 34% stake in Atari Europe on May 14, 2009, paving the way for its acquisition from Infogrames.[43] Atari has had significant financial issues for several years now, posting losses in the tens of millions since 2005.[44]

In May 2009, Infogrames Entertainment, SA, the parent company of Atari, Inc. and Atari Interactive, Inc., announced it would change its name to Atari, SA.

As of March 31, 2011, the Board of Directors consisted of Frank Dangeard, Jim Wilson, Tom Virden, Gene Davis and Alexandra Fichelson.[3]

On January 21, 2013, Atari, Inc., Atari Interactive, Inc., Humongous, Inc. and California US Holdings, Inc. (collectively, the "Companies") filed petitions for relief under Chapter 11 of the United States Bankruptcy Code in the United States Bankruptcy Court for the Southern District of New York.[46] All three Ataris emerged from bankruptcy one year later and the entering of the social casino gaming industry with Atari Casino.[47] Frederic Chesnais, who now heads all three companies, stated that their entire operations consist of a staff of 10 people.[48]

On June 22, 2014, Atari announced a new corporate strategy that would include a focus on "new audiences", specifically "LGBT, social casinos, real-money gambling, and YouTube".[49]

Retrieved from "https://tme.miraheze.org/w/index.php?title=Atari&oldid=3281"
Categories:
Hidden categories:
Cookies help us deliver our services. By using our services, you agree to our use of cookies.