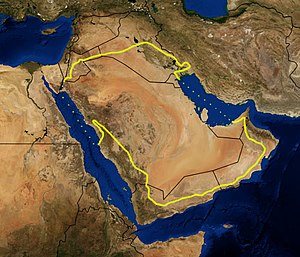 The Arabian Desert is located in Western Asia. It is a vast desert wilderness stretching from Yemen to the Persian Gulf and Oman to Jordan and Iraq. It occupies most of the Arabian Peninsula, with an area of 2,330,000 square kilometers (900,000 sq mi). At its center is the Rub'al-Khali, one of the largest continuous bodies of sand in the world. Gazelles, oryx, sand cats, and spiny-tailed lizards are just some of the desert-adapted species that survive in this extreme environment, which features everything from red dunes to deadly quicksand. The climate is mostly dry (the major part receives around 100 mm of rain per year but some very rare places receives down to 50 mm), and temperatures oscillate between very high heat and seasonal night time freezes. It is part of the Deserts and xeric shrublands biome and the Palearctic ecozone. This ecoregion holds little biodiversity, although a few endemic plants grow here. Many species, such as the striped hyena, jackal and honey badger have become extinct in this area due to hunting, human encroachment and habitat destruction. Other species have been successfully re-introduced, such as the sand gazelle, and are protected at a number of reserves. Overgrazing by livestock, off-road driving, and human destruction of habitat are the main threats to this desert ecoregion.

Some of natural resources available in the Arabian Desert are oil, natural gas, phosphates, and sulfur.

The Rub'al-Khali has very limited floristic diversity. There are only 37 species, 20 recorded in the main body of the sands and 17 around the outer margins. Among these 37 species, only one or two are endemic. Vegetation is very diffuse but fairly evenly distributed, with some interruptions of near sterile dunes.
Some typical plants are:

Other widespread species are:

Very little trees may be found except at the outer margin (typically Acacia ehrenbergiana and Prosopis cineraria).
Other species are a woody perennial Calligonum comosum and annual herbs such as Danthonia forskallii

The rainfall amount is generally around 100 mm, and the driest areas can receive between 30 and 40 mm of annual rain. Such dryness remains very rare throughout the desert, however. There are hardly any hyperarid areas in the Arabian Desert, in contrast with the Sahara Desert, where more than half of the area is hyperarid (annual rainfall below 50 mm).

The desert lies mostly in Saudi Arabia, extending into the surrounding countries of Egypt (Sinai), southern Iraq and southern Jordan. The Arabian desert is bordered by 5 countries. Bordering the Persian Gulf, there is an extension into Qatar and, further east, the region covers almost all of Abu Dhabi in the United Arab Emirates (UAE). The Rub'al-Khali crosses over from Saudi Arabia into western Oman and eastern Yemen.

The area is home to several different cultures, languages, and peoples, with Islam as the predominant faith. The major ethnic group in the region is the Arabs, whose primary language is Arabic.

Weaponry used by the United States during the Gulf War also poses a huge risk to the environmental stability of the area. Tank columns in the desert plains may disrupt the fragile stability that exists in the desert currently. In 1991, the movement of US tanks over the desert damaged the top protective layer of the desert soil. As a result, a sand dune was released and has started slowly moving downhill.[5] Some people fear this dune could ultimately reach Kuwait City.[5] Another concern is related to the use of toxic depleted uranium munitions by the A-10 "Warthog". Some detractors claim the ammunition is a cancer risk and a source of water contamination.[citation needed] Also in 1991, the U.S. and NATO dropped nearly 300 tons of depleted uranium on Iraqi targets. The splinters resulting from the explosion contaminated the surrounding soil.

The conservation status of the desert is critical/endangered, with species including the sand gazelle and white oryx threatened, and honey badgers, jackals, and striped hyaenas already extirpated.[citation needed]

This ecoregion was the victim of a massive economic-environmental challenge: the sabotage of Kuwait oil facilities that caused vast oil spills and the release of toxins into the atmosphere in the 1990s.

In January 1991 during the Gulf War, Iraqi forces released about 1.7 million m³ (11 million barrels) of oil from storage tanks and tankers directly into the Persian Gulf. In February, they also destroyed 1,164 Kuwaiti oil wells. It took nine months to extinguish these oil fires. These oil spills contaminated 1,000 km (620 mi) of Persian Gulf coast.

The result of the pollution was the death of thousands of water birds and serious damage to the Persian Gulf's aquatic ecosystem, particularly shrimp, sea turtles, dugongs, whales, dolphins and fish.

Retrieved from "https://tme.miraheze.org/w/index.php?title=Arabian_Desert&oldid=11846"
Categories:
Hidden categories:
Cookies help us deliver our services. By using our services, you agree to our use of cookies.