Amazon HQ2 is a proposed corporate headquarters for online retailer and tech company Amazon.com in North America, to supplement the existing Seattle headquarters. Amazon announced the initiative, along with a request for proposals from governments and economic development organizations, in September 2017, attracting attention from more than 200 cities in Canada, the United States and Mexico.[1] Amazon intends to have 50,000 workers at HQ2 and is planning to invest $5 billion in new construction.[2] A shortlist of 20 finalists was announced January 18, 2018.[3] 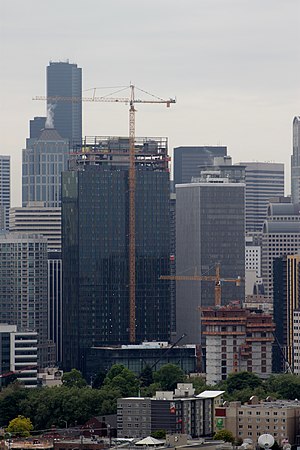 Part of the Amazon headquarters in Seattle, under construction in 2015

Amazon.com was founded in 1994 in Bellevue, Washington, and moved to leased space in the SoDo neighborhood of Seattle. As the company grew, it went through a series of office moves around Downtown Seattle, until announcing a move to a purpose-built headquarters campus in the South Lake Union neighborhood, then a light industrial enclave undergoing urban renewal.[4] As of 2017[update], Amazon occupies 8.1 million square feet (750,000 m2) of office space in 33 buildings, employing 40,000 white collar workers.[5]

This list is incomplete; you can help by expanding it.

As of October 23, 2017[update], 238 proposals were submitted and received by Amazon, representing cities and regions from 54 states, provinces, districts, and territories.[9][10][1] The only U.S. states that did not have a locality that submitted a formal proposal were Arkansas, Hawaii, Iowa, Montana, North Dakota, South Dakota, Vermont and Wyoming.[11] The Canadian provinces of New Brunswick and Saskatchewan also declined to bid, along with the Yukon Territory.[12]

On January 18, 2018, Amazon announced its shortlist of 20 finalists for the HQ2 bidding process. The list focuses mainly on the East Coast and Midwest, with Los Angeles as the sole West Coast finalist.[3][127] Toronto was the only finalist outside of the United States.[128]

Sun Corridor, a Tucson, Arizona economic development firm, sent a 21-foot saguaro cactus to Amazon in an attempt to promote the city's bid. The gift was rejected due to the company's corporate gifts policy, instead donating it to the Arizona-Sonora Desert Museum.[129]

The city of Stonecrest, Georgia, a suburb of Atlanta, voted to de-annex 345 acres (140 ha) of land for Amazon to establish its own city named Amazon around its headquarters.[130]

Sly James, mayor of Kansas City, Missouri, purchased 1,000 products from Amazon, which he donated to charity. James wrote 5-star reviews for each one of them, in which every review mentioned positive attributes of Kansas City.[131]

Primanti Brothers, a chain of sandwich shops based in Pittsburgh, offered free sandwiches to Amazon employees if they chose the city as their second headquarters.[131]

The city of Birmingham, Alabama erected several giant Amazon boxes and dash buttons around public areas. The dash buttons sent out pre-generated tweets to lure Amazon to the city.[131]

New York City Mayor Bill de Blasio announced that major landmarks in the city would be lit in orange to promote the city's campaign for HQ2.[131]

For one of Canada's many bids, messages hoping to persuade Amazon to move to Calgary were sprayed onto sidewalks in Seattle's South Lake Union neighborhood.[131] During an Ottawa Senators hockey game, fans were encouraged to "make noise" for the city of Ottawa's Amazon bid.[8]

Contrary to other cities, Little Rock, Arkansas, purchased a full-page ad in the Washington Post "breaking up" with Amazon, where they described their decision to not submit a bid, while also touting the city's positive attributes.[132] A few days after the bid deadline, the campaign flew a banner plane over Seattle with the same message.[133]

The announcement came as a surprise in Seattle, where Amazon is actively expanding their South Lake Union campus and has 40,000 workers occupying almost 20 percent of the city's office space.[134] Former Seattle Mayor Ed Murray announced that he would begin conversations with Amazon about their long-term plans for the city, while the Seattle Metropolitan Chamber of Commerce characterized the announcement as a "wake-up call" to improve the city's business climate.[135] Comparisons were made to Boeing's decision to move their corporate headquarters from Seattle to Chicago in 2001, which came as a surprise to the city but ultimately only affected a few hundred corporate jobs.[136]

Steven Strauss, a visiting professor of public policy at Princeton University[137] and an expert on economic development,[138] in an editorial in USA Today[139] suggested that metropolitan areas should be cautious about bidding too generously to win the Amazon bid. He points to examples where companies have gone bankrupt and/or not followed up on expansion plans, and notes that it is possible cities could over pay (the so-called "winner's curse") in the sense of providing an overly generous incentive package that turns out to be a money losing proposition for the municipality if all the promised jobs don't materialize.

Moody's Analytics published an analysis of bidding metropolitan areas and determined that Austin, Texas, ranks highest among Amazon's criteria, followed by Atlanta, Philadelphia, and Rochester, New York.[140] The New York Times also completed an analysis which found Denver to be the best site based on Amazon's criteria, followed closely by Boston and Washington D.C.[141] Irish gambling site Paddy Power originally listed Atlanta as the odds on favorite to win HQ2, with 2-to-1 odds,[142] but as of January 2018, lists Atlanta and Austin as sharing 3-to-1 odds of winning Amazon HQ2.[143]

Retrieved from "https://tme.miraheze.org/w/index.php?title=Amazon_HQ2&oldid=33895"
Categories:
Hidden categories:
Cookies help us deliver our services. By using our services, you agree to our use of cookies.