In Christianity, All Souls' Day commemorates All Souls, the Holy Souls, or the Faithful Departed; that is, the souls of Christians who have died. Observing Christians typically remember deceased relatives on the day.[2][3] In Western Christianity the annual celebration is now held on 2 November and is associated with the three days of Allhallowtide, including All Saints' Day (1 November) and its vigil, Halloween (31 October).[4] In the Catholic Church, "the faithful" refers specifically to baptized Catholics; "all souls" commemorates the church penitent of souls in Purgatory, whereas "all saints" commemorates the church triumphant of saints in Heaven. In the liturgical books of the western Catholic Church (the Latin Church) it is called the Commemoration of All the Faithful Departed (Latin: Commemoratio omnium fidelium defunctorum), and is celebrated annually on 2 November. In the ordinary form and Divine Worship form of the Roman Rite, it remains on 2 November if this date falls on a Sunday;[5][6] in the extraordinary form, it is transferred to Monday, 3 November.[7] On this day in particular, Catholics pray for the dead.[8] In the Church of England it is called The Commemoration of the Faithful Departed (All Souls' Day) and is an optional celebration; Anglicans view All Souls' Day as an extension of the observance of All Saints' Day and it serves to "remember those who have died", in connection with the theological doctrines of the resurrection of the body and the Communion of Saints.[9][10] In the Eastern Orthodox Church and the associated Eastern Catholic Churches, it is celebrated several times during the year and is not associated with the month of November.

Beliefs and practices associated with All Souls' Day vary widely among Christian churches and denominations.

Among Eastern Orthodox and Byzantine (Greek) Catholics, there are several All Souls' Days during the year. Most of these fall on Saturday, since Jesus lay in the Tomb on Holy Saturday. They occur on the following occasions:

In the Serbian Orthodox Church there is also a commemoration of the dead on the Saturday closest to the Conception of St. John the Baptist—23 September[citation needed]

In addition to the Sundays mentioned above, Saturdays throughout the year are days for general commemoration of all saints, and special hymns to all saints are chanted from the Octoechos, unless some greater feast or saint's commemoration occurs.[citation needed]

East Syriac churches including the Syro Malabar Church and Chaldean Catholic Church commemorates the feast of departed faithful on the last Friday of Epiphany(which means Friday just before start of Great Lent).[11] The season of Epiphany remembers the revelation of Christ to the world. And on each Fridays of season of Epiphany the church remembers some important figures in the evangelism.[12]

In east Syriac liturgy the church remembers departed souls including saints on every Fridays throughout the year since the Christ was crucified and died on Friday. 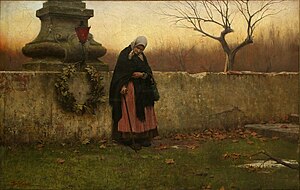 In Milan the date was 16 October until changed in the second half of the 16th century to 2 November. This date, the day after All Saints' Day, was that which Saint Odilo of Cluny chose in the 11th century for all the monasteries dependent on the Abbey of Cluny. From these the 2 November custom spread to other Benedictine monasteries and thence to the Western Church in general.[13]

In the Roman Rite as revised in 1969, if 2 November falls on a Sunday, the Mass is of All Souls, but the Liturgy of the Hours is that of the Sunday. However, public celebration of Lauds and Vespers of the Dead with the people participating is permitted. While celebration of a Sunday, a solemnity or a feast of the Lord replacing a Sunday begins on the previous evening with Vespers and perhaps evening Mass, the general norms do not allow for anticipation on Saturday evening of the liturgy of All Souls' Day falling on a Sunday, and so they suggest that the formula of the Mass on that Saturday evening is that of the solemnity of All Saints, which outranks the Sunday of Ordinary Time whose Mass would be celebrated on that evening.[13][15] However, in 2014, the United States Conference of Catholic Bishops decided that for that year the Saturday evening (Sunday vigil) Mass in that country was to be that of All Souls; in countries such as Italy the situation was less clear.[16]

Faithful departed may gain indulgence, either plenary or partial indulgence, if the living perform certain acts and meet the specified requirements.[17]:N.15

In Divine Worship: The Missal the minor propers (Introit, Gradual, Tract, Sequence, Offertory, and Communion) are those used for Renaissance and Classical musical requiem settings, including the Dies Irae. This permits the performance of traditional requiem settings in the context of the Divine Worship Form of the Roman Rite on All Souls Day as well as at funerals, votive celebrations of all faithful departed, and anniversaries of deaths.[18]

All Souls Anglican Church in the Diocese of Sydney, a parish dedicated to All Souls

In the Anglican Communion, All Souls' Day is known liturgically as the Commemoration of All Faithful Departed, and is an optional observance seen as "an extension of All Saints' Day", the latter of which marks the second day of Allhallowtide.[10][19] Historically and at present, several Anglican churches are dedicated to All Souls. During the English Reformation, the observance of All Souls' Day lapsed, although a new Anglican theological understanding of the day has "led to a widespread acceptance of this commemoration among Anglicans".[20] Patricia Bays, with regard to the Anglican view of All Souls' Day, wrote that:[9]

“All Souls Day (November 2) is a time when we particularly remember those who have died. The prayers appointed for that day remind us that we are joined with the Communion of Saints, that great group of Christians who have finished their earthly life and with who we share the hope of resurrection from the dead.[9]”

As such, Anglican parishes "now commemorate all the faithful departed in the context of the All Saints' Day celebration", in keeping with this fresh perspective.[21] Contributing to the revival was the need "to help Anglicans mourn the deaths of millions of soldiers in World War I".[22] Members of the Guild of All Souls, an Anglican devotional society founded in 1873, "are encouraged to pray for the dying and the dead, to participate in a requiem of All Souls' Day and say a Litany of the Faithful Departed at least once a month".[23]

At the Reformation the celebration of All Souls' Day was fused with All Saints' Day in the Church of England[24] or, in the judgement of some, it was "deservedly abrogated".[25] It was reinstated in certain parishes in connection with the Oxford Movement of the 19th century[24] and was officially restored in United States Anglicanism with the 1979 Book of Common Prayer[24] and in the Church of England with the 1980 Alternative Service Book. It features in Common Worship as a Lesser Festival called "Commemoration of the Faithful Departed (All Souls' Day)".

A graveyard outside a Lutheran church in the Swedish city of Röke during Allhallowtide.

Among continental Protestants its tradition has been more tenaciously maintained. During Luther's lifetime, All Souls' Day was widely observed in Saxony although the Roman Catholic meaning of the day was discarded;[26] ecclesiastically in the Lutheran Church, the day was merged with, and is often seen as an extension of All Saints' Day,[27] with many Lutherans still visiting and decorating graves on all the days of Allhallowtide, including All Souls' Day.[28] Just as it is the custom of French people, of all ranks and creeds, to decorate the graves of their dead on the jour des morts, so German,[26] Polish and Hungarian people stream to the graveyards once a year with offerings of flowers and special grave lights (see the picture). Among Czech people the custom of visiting and tidying graves of relatives on the day is quite common. In 1816, Prussia introduced a new date for the remembrance of the Dead among its Lutheran citizens: Totensonntag, the last Sunday before Advent. This custom was later also adopted by the non-Prussian Lutherans in Germany, but it has not spread much beyond the Protestant areas of Germany.

In the Methodist Church, saints refer to all Christians and therefore, on All Saint's Day, the Church Universal, as well as the deceased members of a local congregation are honoured and remembered.[29][30] In Methodist congregations that celebrate the liturgy on All Souls Day, the observance, as with Anglicanism and Lutheranism, is viewed as an extension of All Saints' Day and as such, Methodists "remember our loved ones who had died" in their observance of this feast.[31]

Some believe that the origins of All Souls' Day in European folklore and folk belief are related to customs of ancestor veneration[32] practiced worldwide, through events such as, in India Pitru Paksha, the Chinese Ghost Festival, the Japanese Bon Festival. The Roman custom was that of the Lemuria.[33]

The formal commemoration of the saints and martyrs (All Saints' Day) existed in the early Christian church since its legalization, and alongside that developed a day for commemoration of all the dead (All Souls' Day). The modern date of All Souls' Day was first popularized in the early eleventh century after Abbot Odilo established it as a day for the monks of Cluny and associated monasteries to pray for the souls in purgatory.[34]

Many of these European traditions reflect the dogma of purgatory. For example, ringing bells for the dead was believed to comfort them in their cleansing there, while the sharing of soul cakes with the poor helped to buy the dead a bit of respite from the suffering of purgatory. In the same way, lighting candles was meant to kindle a light for the dead souls languishing in the darkness. Out of this grew the traditions of "going souling" and the baking of special types of bread or cakes.[35]

In Tirol, cakes are left for them on the table and the room kept warm for their comfort. In Brittany, people flock to the cemeteries at nightfall to kneel, bareheaded, at the graves of their loved ones, and to anoint the hollow of the tombstone with holy water or to pour libations of milk on it. At bedtime, the supper is left on the table for the souls.[26]

In Bolivia, many people believe that the dead eat the food that is left out for them.[citation needed] In Brazil people attend a Mass or visit the cemetery taking flowers to decorate their relatives' grave, but no food is involved.[citation needed]

In Malta many people make pilgrimages to graveyards, not just to visit the graves of their dead relatives, but to experience the special day in all its significance. Visits are not restricted to this day alone. During the month of November, Malta's cemeteries are frequented by families of the departed. Mass is also said throughout the month, with certain Catholic parishes organising special events at cemetery chapels.[citation needed]

In Linz, funereal musical pieces known as aequales were played from tower tops on All Soul's Day and the evening before.[36]

Retrieved from "https://tme.miraheze.org/w/index.php?title=All_Souls%27_Day&oldid=28537"
Categories:
Hidden categories:
Cookies help us deliver our services. By using our services, you agree to our use of cookies.