All Saints' Day, also known as All Hallows' Day, Hallowmas,[3][4] Feast of All Saints,[5][6] or Solemnity of All Saints,[7] is a Christian festival celebrated in honour of all the saints, known and unknown. In Western Christianity, it is celebrated on 1 November by the Roman Catholic Church, the Anglican Communion, the Methodist Church, the Lutheran Church, and other Protestant churches. The Eastern Orthodox Church and associated Eastern Catholic churches celebrate it on the first Sunday after Pentecost.[8] Oriental Orthodox churches of Chaldea and associated Eastern Catholic churches celebrate All Saints' Day on the first Friday after Easter.[9]

Christian celebration of All Saints' Day and All Souls' Day stems from a belief that there is a powerful spiritual bond between those in heaven (the "Church triumphant"), and the living (the "Church militant"). In Catholic theology, the day commemorates all those who have attained the beatific vision in Heaven. It is a national holiday in many historically Catholic countries. In Methodist theology, All Saints Day revolves around "giving God solemn thanks for the lives and deaths of his saints", including those who are "famous or obscure".[10] As such, individuals throughout the Church Universal are honoured, such as Paul the Apostle, Augustine of Hippo and John Wesley, in addition to individuals who have personally led one to faith in Jesus, such as one's grandmother or friend.[10]

In the Western Christian practice, the liturgical celebration begins at Vespers on the evening of 31 October, All Hallows' Eve (All Saints' Eve), and ends at the close of 1 November. It is thus the day before All Souls' Day, which commemorates the faithful departed. In many traditions, All Saints' Day is part of the triduum of Allhallowtide, which lasts three days from 31 October to 2 November inclusive.[11]

In the British Isles, it is known that churches were already celebrating All Saints on 1 November at the beginning of the 8th century to coincide or replace the Celtic festival of Samhain.[12][13][14] James Frazer suggests that 1 November was chosen because it was the date of the Celtic festival of the dead (Samhain) – the Celts had influenced their English neighbours, and English missionaries had influenced the Germans. However, Ronald Hutton points out that, according to Óengus of Tallaght (d. ca. 824), the 7th/8th century church in Ireland celebrated All Saints on 20 April. He suggests that 1 November date was a Germanic rather than a Celtic idea.[12]

In the East[edit | edit source]

The feast of All Saints achieved great prominence in the 9th century, in the reign of the Byzantine Emperor Leo VI "the Wise" (866–911). His wife, Empress Theophano – commemorated on 16 December – lived a devout life. After her death in 893,[15] her husband built a church, intending to dedicate it to her. When he was forbidden to do so, he decided to dedicate it to "All Saints", so that if his wife were in fact one of the righteous, she would also be honoured whenever the feast was celebrated.[16] According to tradition, it was Leo who expanded the feast from a commemoration of All Martyrs to a general commemoration of All Saints, whether martyrs or not.

This Sunday marks the close of the Paschal season. To the normal Sunday services are added special scriptural readings and hymns to all the saints (known and unknown) from the Pentecostarion.

In addition to the Mondays mentioned above, Saturdays throughout the year are days for general commemoration of all saints, and special hymns to all saints are chanted from the Octoechos.

The celebration of 1 November in Lebanon as a holiday is simply the influence of Western Catholic orders present in Lebanon and is not Maronite in origin. The traditional Maronite feast equivalent to the honor of all saints in their liturgical calendar is one of three Sundays in preparation for Lent called the Sunday of the Righteous and the Just. The following Sunday is the Sunday of the Faithful Departed (similar to All Souls Day in Western calendar).

In East Syriac tradition the All Saints Day celebration falls on the first Friday after resurrection Sunday.[9] This is because all departed faithful are saved by the blood of Jesus and they resurrected with the Christ. Normally in east Syriac liturgy the departed souls are remembered on Friday. Church celebrates All souls day on Friday before the beginning of Great lent or Great Fast.[17]

In the West[edit | edit source]

The Christian holiday of All Saints' Day falls on 1 November, followed by All Souls' Day on 2 November, and is a Holy Day of Obligation in the Latin Rite of the Catholic Church, as well as a Principal Feast of the Anglican Communion.

In the early days the Christians were accustomed to solemnise the anniversary of a martyr's death for Christ at the place of martyrdom. In the 4th century, neighbouring dioceses began to interchange feasts, to transfer relics, to divide them, and to join in a common feast; as is shown by the invitation of St. Basil of Caesarea (397) to the bishops of the province of Pontus. In the persecution of Diocletian the number of martyrs became so great that a separate day could not be assigned to each. But the Church, feeling that every martyr should be venerated, appointed a common day for all. The first trace of this we find in Antioch on the Sunday after Pentecost. We also find mention of a common day in a sermon of St. Ephrem the Syrian (373), and in the 74th homily of St. John Chrysostom (407). According to Ephrem, this feast was observed at Edessa on 13 May, and John Chrysostom says it was on the Sunday after Pentecost in Constantinople.[18] As early as 411 there is in the Chaldean Calendar a "Commemoratio Confessorum" for the Friday after Easter.[19]

On 13 May 609 or 610, Pope Boniface IV consecrated the Pantheon at Rome to the Blessed Virgin and all the martyrs, ordering an anniversary;[19] the feast of the dedication Sanctae Mariae ad Martyres has been celebrated at Rome ever since. There is evidence that from the 5th to the 7th centuries there existed in certain places and at sporadic intervals a feast date on 13 May to celebrate the holy martyrs.[20] The origin of All Saints' Day cannot be traced with certainty, and it has been observed on various days in different places. However, there are some who maintain the belief that it has origins in the pagan observation of 13 May, the Feast of the Lemures, in which the malevolent and restless spirits of the dead were propitiated. Some liturgiologists base the idea that this Lemuria festival was the origin of that of All Saints on their identical dates and on the similar theme of "all the dead".[21] Meanwhile, others consider that 13 May was perhaps deliberately chosen by the Pope because of its celebration already established in the East.[22]

The feast of All Saints, on its current date, is traced to the foundation by Pope Gregory III (731–741) of an oratory in St. Peter's for the relics "of the holy apostles and of all saints, martyrs and confessors, of all the just made perfect who are at rest throughout the world",[23] with the date moved to 1 November and the 13 May feast suppressed.[24]

This fell on the Celtic holiday of Samhain, which had a theme similar to the Roman festival of Lemuria, but which was also a harvest festival. The Irish, having celebrated Samhain in the past, did not celebrate All Hallows Day on this 1 November date, as extant historical documents attest that the celebration in Ireland took place in the spring: "... the Felire of Oengus and the Martyrology of Tallaght prove that the early medieval churches [in Ireland] celebrated the feast of All Saints on 20 April."[25]

A November festival of all the saints was already widely celebrated on 1 November in the days of Charlemagne. It was made a day of obligation throughout the Frankish empire in 835, by a decree of Louis the Pious, issued "at the instance of Pope Gregory IV and with the assent of all the bishops",[23] which confirmed its celebration on 1 November. The octave was added by Pope Sixtus IV (1471–1484).[23]

The festival was retained after the Reformation in the calendar of the Anglican Church and in many Lutheran churches.[23] In the Lutheran churches, such as the Church of Sweden, it assumes a role of general commemoration of the dead. In the Swedish calendar, the observance takes place on the Saturday between 31 October and 6 November. In many Lutheran Churches, it is moved to the first Sunday of November. In the Church of England, mother church of the Anglican Communion, it is a Principal Feast and may be celebrated either on 1 November or on the Sunday between 30 October and 5 November. It is also celebrated by other Protestants of the English tradition, such as the United Church of Canada, the Methodist churches and the Wesleyan Church.

Protestants disagree with the idea of saints as it is in the Roman Catholic tradition, and generally commemorate all Christians on All Saints' Day; if they observe All Saints Day at all they use it to remember all Christians both past and present. In the United Methodist Church, All Saints' Day is celebrated on the first Sunday in November. It is held, not only to remember Saints, but also to remember all those who have died who were members of the local church congregation. In some congregations, a candle is lit by the Acolyte as each person's name is called out by the clergy. Prayers and responsive readings may accompany the event. Often, the names of those who have died in the past year are affixed to a memorial plaque.

In many Lutheran churches, All Saints' Day is celebrated the Sunday after Reformation is celebrated (the date for Reformation is 31 October, so Reformation Sunday is celebrated on or before 31 October). In most congregations, the festival is marked as an occasion to remember the dead. The names of those who have died from the congregation within the last year are read during worship and a bell is tolled, chime is played, and/or candle is lit for each name read. While the dead are solemnly remembered during worship on All Saints' Sunday, the festival is ultimately a celebration of Christ's victory over death. 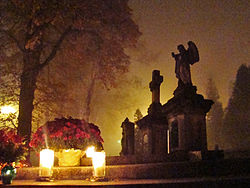 All Saints' Day at a cemetery in Sanok – flowers and lit candles are placed to honor the memory of deceased relatives. Poland, 1 November 2011

In France, and throughout the Francophone world, the day is known as La Toussaint. Flowers (especially Chrysanthemums), or wreaths called 'couronnes de toussaints' are placed at each tomb or grave. The following day, 2 November (All Souls' Day) is called Le jour des morts, the Day of the Dead.

In Mexico, Guatemala, Portugal and Spain, offerings (Portuguese: oferendas, Spanish: ofrendas) are made on this day. In Spain and Mexico the play Don Juan Tenorio is traditionally performed.

Hallow-mas in the Philippines is variously called "Undás", "Todos los Santos" (Spanish, "All Saints"), and sometimes "Araw ng mga Patay / Yumao" (Tagalog, "Day of the dead / those who have passed away"), which actually refers to the following day of All Souls' Day but includes it. Filipinos traditionally observe this day by visiting the family dead to clean and repair their tombs. Offerings of prayers, flowers, candles, and even food are made, while Chinese Filipinos additionally burn incense and kim. Many also spend the day and ensuing night holding reunions at the graves, playing games and music, singing karaoke, and feasting.[26]

In English-speaking countries, the festival is traditionally celebrated with the hymn "For All the Saints" by Walsham How. The most familiar tune for this hymn is Sine Nomine by Ralph Vaughan Williams. Other hymns that are popularly sung during corporate worship on this day are "I Sing a Song of the Saints of God" and "Ye Watchers and Ye Holy Ones".

Retrieved from "https://tme.miraheze.org/w/index.php?title=All_Saints%27_Day&oldid=28535"
Categories:
Hidden categories:
Cookies help us deliver our services. By using our services, you agree to our use of cookies.