From The Multilingual Encyclopedia
Jump to navigation Jump to search
Not to be confused with AirTran Airways.

Air Transat is a Canadian leisure airline based in Montreal, Quebec,[4] operating scheduled and charter flights, serving 63 destinations in 30 countries.[3] The airline is owned and operated by Transat A.T. Inc.

Air Transat made its inaugural flight on November 14, 1987, travelling from Montreal to Acapulco. Six years later, Air Transat assumed defunct Nationair's maintenance base and aircraft. Today, the company books over 3.5 million passengers a year. It is a wholly owned subsidiary of Transat A.T. Inc.

Air Transat is now one of Canada's largest airlines, after Air Canada and WestJet. Air Transat has 2,100 (2010) employees.[5] On February 13, 2011, Air Transat Flight TS163 operated with their first all female flight crew from Cancun to Vancouver. The airline has won many awards, including the 2012 Skytrax World's Best Leisure Airline Award.[6]

On February 13, 2009, Transat A.T. announced a five-year partnership with CanJet. Since 1 May 2009, Transat Tours Canada has chartered CanJet's Boeing 737 aircraft flying from Canadian cities to various destinations. This replaced an agreement with Calgary based Westjet.[7]

Although the first two groups of refugees from Syria arrived in Canada on government aircraft in December 2015, the next two groups were on Air Transat aircraft; the first was Flight TS8500 from Amman, Jordan to Toronto which departed on 20 December. While it was unlikely that Air Transat would be the exclusive airline chartered by the Canadian government, especially if more than 35,000 refugees would arrive in 2016[9] a spokesman advised the Toronto Star that the company had been confirmed as the airline that would bring the second group to Canada on 21 December.[10] In a Transat press release, Jean-François Lemay, the carrier's general manager made the following statement, "We are very pleased to be the first Canadian airline company to engage in this major humanitarian effort, and to be assisting the Canadian government and international authorities in this way."[11]

Air Transat and Flair Air were accused by a CBC News story of misleading customers, regulators and the Mexicans by marketing and selling nonstop tickets between Edmonton and Cancun. CBC uncovered a letter in which the airlines admitted that they would frequently divert for a technical stop to refuel. [12] 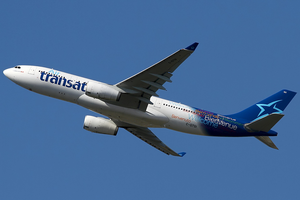 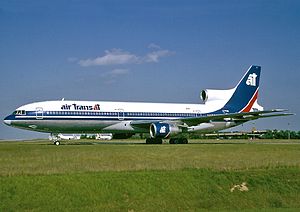 Air Transat has operated several aircraft including the following:[16]

On August 24, 2001, Air Transat Flight 236, an Airbus A330-200, en route from Toronto to Lisbon with 306 crew and passengers, made an emergency landing in the Azores without engine power due to fuel starvation over the Atlantic Ocean. The aircraft safely landed at Lajes Air Base, on Terceira Island. The aircraft was evacuated in 90 seconds. All 306 passengers on board survived. An investigation revealed that the cause of the accident was a fuel leak in the number two engine which was caused by an incorrect part installed in the hydraulics system by Air Transat maintenance staff. The part did not maintain adequate clearance between the hydraulic lines and the fuel line, allowing vibration in the hydraulic lines to degrade the fuel line and cause the leak. The aircraft involved in the incident was repaired and remains in service with Air Transat. The incident went down in history as the longest non-powered flight and landing by a commercial airliner.[17]

On March 6, 2005, Air Transat Flight 961, an Airbus A310-300, en route from Varadero to Québec City with 9 crew and 261 passengers on board, experienced a structural failure in which the rudder detached in flight. The crew returned to Cuba, where they made a safe landing. It has been established that no unusual rudder inputs had been used by the crew during the flight, they were not manipulating the rudder when it failed and there was no obvious fault in the rudder or yaw-damper system. The investigation that followed determined that the manufacturer's inspection procedure for the composite rudder was not adequate. Inspection procedures for composite structures on airliners were changed because of this incident.[18]

On July 18, 2016, Air Transat Flight 725, an Airbus A310-300, en route from Glasgow to Toronto with 250 passengers was grounded overnight following the arrest of pilots Captain Jean-Francois Perreault and Imran Zafar Syed for allegedly preparing to fly under the influence of alcohol. The flight eventually flew under new crew and arrived in Toronto at noon the following day. Both pilots were charged with threatening or abusive behaviour and performing an aviation function while over the legal alcohol limit. Perreault and Syed made no pleas or declarations during their initial hearing on July 19, 2016.[19] Both pilots were suspended from active duty by Air Transat on July 22, 2016. [20]

On July 31, 2017, Air Transat Flight 157, an Airbus A330-200, enroute from Brussels to Montreal-Trudeau was diverted to Ottawa due to a chain of storms passing through the Montreal area. More than 300 passengers were kept on the plane without water, electricity, or air conditioning and rationed food for 6 hours. A passenger called 911 due to the deteriorating situation with some passengers complaining of suffocation. Airport authorities responded by delivering water and disembarking passengers including those complaining of suffocation injuries. Air Transat blamed congestion at Ottawa's airport for the situation, where airport administration stated that the pilots asked for no help during the six-hour situation. [21] The event enraged Canadian lawmakers pushing to improve Canada's passenger bill of rights. [22]

Retrieved from "https://tme.miraheze.org/w/index.php?title=Air_Transat&oldid=20128"
Categories:
Hidden categories:
Cookies help us deliver our services. By using our services, you agree to our use of cookies.