From The Multilingual Encyclopedia
Jump to navigation Jump to search
For the language family, see Ainu languages.
Not to be confused with the Äynu language.

Hokkaido Ainu (/ˈaɪnuː/;[4] Ainu: アイヌ・イタㇰ Aynu=itak; Japanese: アイヌ語 Ainu-go) is the sole survivor of the Ainu languages. It is spoken by members of the Ainu ethnic group on the northern Japanese island of Hokkaido.

Until the 20th century, Ainu languages were also spoken throughout the southern half of the island of Sakhalin and by small numbers of people in the Kuril Islands. There were at least 19 dialects of the Ainu languages. Only the Hokkaido variant survives, the last speaker of Sakhalin Ainu having died in 1994. Hokkaido Ainu is moribund, though attempts are being made to revive it. Currently, the Japanese government is constructing a facility dedicated to preserving Ainu culture, including the language.[5]

Ainu has no generally accepted genealogical relationship to any other language family. 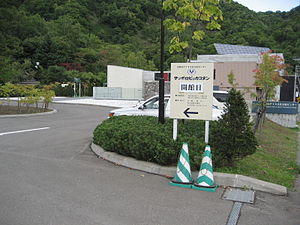 Depending on the classification system used, Ainu could be considered a moribund language or a critically endangered language. As of 2016, Ethnologue lists Ainu as class 8b: "nearly extinct."[6] It has been endangered since before the 1960s. Most of the approximately 15,000 ethnic Ainu in Japan speak only Japanese. During the 1980s, in the town of Nibutani (part of Biratori, Hokkaido), where many of the remaining native speakers live, there were 100 speakers, of whom only fifteen used the language every day.

There is an active movement to revitalize the language, mainly in Hokkaido but also elsewhere. Ainu oral literature has been documented both in hopes of safeguarding it for future generations, as well as using it as a teaching tool for language learners.[7] Beginning in 1987, the Ainu Association of Hokkaido began hosting Ainu language classes, and have released instructional materials on the language, including a textbook.[7]

Due to the Ainu Cultural Promotion Act of 1997, Ainu dictionaries transformed and became tools for improving communication and preserving records of the Ainu language in order to revitalize the language and promote the culture.[8] There is now an increasing number of second-language learners, especially in Hokkaido, in large part due to the pioneering efforts of the late Ainu folklorist, activist and former Diet member Shigeru Kayano, himself a native speaker. The Ainu Association of Hokkaido is the main supporter of Ainu culture in Hokkaido. Ainu language classes have been conducted in some areas in Japan and small numbers of young people are learning Ainu. Efforts have also been made to produce web-accessible materials for conversational Ainu because most documentation of the Ainu language focused on the recording of folktales.[9]

Ainu syllables are CV(C), that is, they have an obligatory syllable onset and an optional syllable coda. There are few consonant clusters.

There are five vowel sounds in Ainu:

Plosives /p t ts k/ may be voiced [b d dz ɡ] between vowels and after nasals. Both /ti/ and /tsi/ are realized as [t͡ʃi], and /s/ becomes [ʃ] before /i/ and at the end of syllables. There is some variation among dialects; in the Sakhalin dialect, syllable-final /p, t, k, r/ lenited and merged into /x/. After an /i/, this /x/ is pronounced [ç]. A glottal stop [ʔ] is often inserted at the beginning of words, before an accented vowel, but is non-phonemic.

There is a pitch accent system. The accentuation of specific words varies somewhat from dialect to dialect. Generally, words including affixes have a high pitch on the stem, or on the first syllable if it is closed or has a diphthong, while other words have the high pitch on the second syllable, although there are exceptions to this generalization.

Typologically, Ainu is similar in word order (and some aspects of phonology) to Japanese.

Ainu has a canonical word order of SOV,[10] and it uses postpositions rather than prepositions. Nouns can cluster to modify one another; the head comes at the end. Verbs, which are inherently either transitive or intransitive, accept various derivational affixes. Ainu does not have grammatical gender. Plurals are indicated by a suffix.[10]

Classical Ainu, the language of the yukar, is polysynthetic, with incorporation of nouns and adverbs; this is greatly reduced in the modern colloquial language.

Applicatives may be used in Ainu to place nouns in the dative, instrumental, comitative, locative, allative, or ablative roles. Besides freestanding nouns, these roles may be assigned to incorporated nouns, and such use of applicatives is in fact mandatory for incorporating oblique nouns. Like incorporation, applicatives have grown less common in the modern language.

Ainu has a closed class of plural verbs, and some of these are suppletive.

The Ainu language is written in a modified version of the Japanese katakana syllabary. There is also a Latin-based alphabet in use. The Ainu Times publishes in both. In the Latin orthography, /ts/ is spelled c and /j/ is spelled y; the glottal stop, [ʔ], which only occurs initially before accented vowels, is not written. Other phonemes use the same character as the IPA transcription given above. An equals sign (=) is used to mark morpheme boundaries, such as after a prefix. Its pitch accent is denoted by acute accent in Latin script (e.g., á). This is usually not denoted in katakana.

Rev. John Batchelor was an English missionary who lived among the Ainu, studied them and published many works on the Ainu language.[11][12] Batchelor wrote extensively, both works about the Ainu language and works in Ainu itself. He was the first to write in Ainu and use a writing system for it.[13] Batchelor's translation of the New Testament was published in Yokohama in 1897 by a joint committee of the British and Foreign Bible Society, the American Bible Society, and the National Bible Society of Scotland. Other books written in Ainu include dictionaries, a grammar, and books on Ainu culture and language.[14]

A Unicode standard exists for a set of extended katakana (Katakana Phonetic Extensions) for transliterating the Ainu language and other languages written with katakana.[15] These characters are used to write final consonants and sounds that cannot be expressed using conventional katakana. The extended katakana are based on regular katakana and either are smaller in size or have a handakuten. As few fonts yet support these extensions, workarounds exist for many of the characters, such as using a smaller font with the regular katakana ク ku to produce ク to represent the separate small katakana glyph ㇰ ku used as in アイヌイタㇰ (Aynu itak).

This is a list of special katakana used in transcribing the Ainu language. Most of the characters are of the extended set of katakana, though a few have been used historically in Japanese[citation needed], and thus are part of the main set of katakana. A number of previously proposed characters have not been added to Unicode as they can be represented as a sequence of two existing codepoints.

Since the above rule is used systematically, some katakana combinations have different sounds from conventional Japanese.

There are long vowels in the Sakhalin dialect. Either a circumflex or macron is used in the Latin alphabet, and the long vowel sign (ー) is used in katakana.

The Ainu have a rich oral tradition of hero-sagas called yukar, which retain a number of grammatical and lexical archaisms. Yukar was memorized and told at get togethers and ceremonies that often lasted hours or even days. The Ainu also have another form of narrative often used called "Uepeker", which was used in the same contexts.

Retrieved from "https://tme.miraheze.org/w/index.php?title=Ainu_language&oldid=25725"
Categories:
Hidden categories:
Cookies help us deliver our services. By using our services, you agree to our use of cookies.