The Académie française (French pronunciation: ​[akademi fʁɑ̃ˈsɛz]), known in English as the French Academy, is the pre-eminent French council for matters pertaining to the French language. The Académie was officially established in 1635 by Cardinal Richelieu, the chief minister to King Louis XIII.[1] Suppressed in 1793 during the French Revolution, it was restored as a division of the Institut de France in 1803 by Napoleon Bonaparte.[1] It is the oldest of the five académies of the institute.

The Académie consists of forty members, known informally as les immortels (the immortals).[2] New members are elected by the members of the Académie itself. Academicians hold office for life, but they may resign or be dismissed for misconduct. Philippe Pétain, named Marshal of France after the victory of Verdun of World War I, was elected to the Academy in 1931 and, after his governorship of Vichy France in World War II, was forced to resign his seat in 1945.[3] The body has the task of acting as an official authority on the language; it is charged with publishing an official dictionary of the language. Its rulings, however, are only advisory, not binding on either the public or the government.[citation needed] 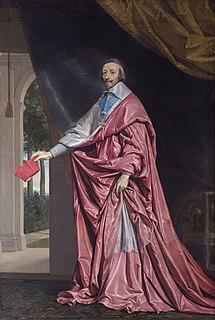 Cardinal Richelieu, responsible for the establishment of the Académie

The Académie had its origins in an informal literary group deriving from the salons held at the Hôtel de Rambouillet during the late 1620s and early 1630s. The group began meeting at Valentin Conrart's house, seeking informality. There were then nine members. Cardinal Richelieu, the chief minister of France, made himself protector of the group, and in anticipation of the formal creation of the academy, new members were appointed in 1634. On 22 February 1635, at Richelieu's urging, King Louis XIII granted letters patent formally establishing the council; according to the letters patent registered at the Parlement de Paris on 10 July 1637,[1] the Académie française was "to labor with all the care and diligence possible, to give exact rules to our language, to render it capable of treating the arts and sciences". The Académie française has remained responsible for the regulation of French grammar, spelling, and literature.

Richelieu's model, the first academy devoted to eliminating the "impurities" of a language, was the Accademia della Crusca, founded in Florence in 1582, which formalized the already dominant position of the Tuscan dialect of Florence as the model for Italian; the Florentine academy had published its Vocabolario in 1612.[4]

The President of France is the "protector" or patron of the Académie. Cardinal Richelieu originally adopted this role; upon his death in 1642, Pierre Séguier, the Chancellor of France, succeeded him. King Louis XIV adopted the function when Séguier died in 1672; since then, the French head of state has always served as the Académie's protector. From 1672 to 1805, the official meetings of the Académie were in the Louvre; since 1805, the Académie française has met in the Collège des Quatre-Nations (known now as the Palais de l'Institut). The remaining academies of the Institut de France also meet in the Palais de l'Institut.

The Académie française has forty seats, each of which is assigned a separate number. Candidates make their applications for a specific seat, not to the Académie in general: if several seats are vacant, a candidate may apply separately for each. Since a newly elected member is required to eulogize his or her predecessor in the installation ceremony, it is not uncommon that potential candidates refuse to apply for particular seats because they dislike the predecessors so much that even an enormous exercise of tact will not suffice.[citation needed]

Members are known as les Immortels (the Immortals) because of the motto, À l'immortalité ("To Immortality"), that is on the official seal of the charter granted by Cardinal Richelieu.[2]

New members are elected by the Académie itself. (The original members were appointed.) When a seat becomes vacant, a person may apply to the Secretary if she or he wishes to become a candidate. Alternatively, existing members may nominate other candidates. A candidate is elected by a majority of votes from voting members. A quorum is twenty members. If no candidate receives an absolute majority, another election must be performed at a later date. The election is valid only if the protector of the Académie, the President of France, grants his approval. The President's approbation, however, is only a formality. (There was a controversy about the candidacy of Paul Morand, whom Charles de Gaulle opposed in 1958. Morand was finally elected ten years later, and he was received without the customary visit, at the time of investiture, to the Palace Élysée.)

Raymond Poincaré was one of the five French heads of state who became members of the Académie française. He is depicted wearing the habit vert, or green habit, of the Académie.

The new member is then installed at a meeting of the Académie. The new member must deliver a speech to the Académie, which includes a eulogy for the member being replaced. This is followed by a speech made by one of the members. Eight days thereafter, a public reception is held, during which the new member makes a speech thanking his or her colleagues for their election. Once, a member (Georges de Porto-Riche) was not accorded a reception because the eulogy he made of his predecessor was not considered satisfactory, and he refused to rewrite it. Georges Clemenceau refused to be received because he feared that he might be received by his enemy, Raymond Poincaré.

Members remain in the Académie for life. However, the council may dismiss an academician for grave misconduct. The first dismissal occurred in 1638, when Auger de Moléon de Granier was expelled for theft. The most recent dismissals occurred at the end of World War II: Philippe Pétain, Abel Bonnard, Abel Hermant, and Charles Maurras were all excluded for their association with the Vichy regime. In total, twenty members have been expelled from the Académie.

There have been a total of 726 immortels,[2] of whom eight have been women (the first woman, Marguerite Yourcenar, was elected in 1980 – besides the eight elected women, 25 women were candidates, the first one in 1874). Individuals who are not citizens of France may be, and have been, elected. Moreover, although most academicians are writers, one need not be a member of the literary profession to become a member. The Académie has included numerous politicians, lawyers, scientists, historians, philosophers, and senior Roman Catholic clergymen. Five French heads of state have been members (Adolphe Thiers, Raymond Poincaré, Paul Deschanel, Philippe Pétain, and Valéry Giscard d'Estaing) and one foreign head of state (the poet Léopold Sédar Senghor of Senegal, who was also the first African elected, in 1983).[5] Other famous members include Voltaire, Charles, baron de Montesquieu; Victor Hugo; Alexandre Dumas, fils, Émile Littré, Louis Pasteur, Louis, duc de Broglie, and Henri Poincaré.

Many notable French writers have not become members of the Académie française. During 1855, the writer Arsène Houssaye devised the expression “forty-first seat” for deserving individuals who were never elected to the Académie, either because their candidacies were rejected, because they were never candidates, or because they died before appropriate vacancies arose. Notable French authors who never became academicians include Jean-Jacques Rousseau, Jean-Paul Sartre, Joseph de Maistre, Honoré de Balzac, René Descartes, Denis Diderot, Romain Rolland, Charles Baudelaire, Gustave Flaubert, Molière, Marcel Proust, Jules Verne, Théophile Gautier, and Émile Zola.

The official uniform of a member is known as l’habit vert, or green clothing.[2] The habit vert, worn at the Académie's formal ceremonies, was first adopted during Napoleon Bonaparte's reorganization of the Institut de France. It consists of a long black coat and black-feathered bicorne,[2] both richly embroidered with green leafy motifs, together with black trousers or skirt. Further, members other than clergy receive a ceremonial sword (l’épée).[2]

Role as authority on the French language[edit | edit source] 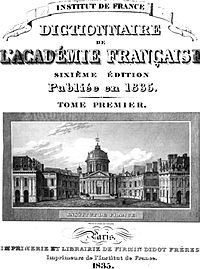 Title page of the 6th edition of the Académie's dictionary (1835)

The Académie is France's official authority on the usages, vocabulary, and grammar of the French language.

The Académie publishes a dictionary of the French language, known as the Dictionnaire de l'Académie française, which is regarded as official in France. A special commission composed of several (but not all) of the members of the Académie compiles the work.[1]

The Académie has published thirteen editions of the dictionary, of which three were preliminary, eight were complete, and two were supplements for specialised words.[6] These are:

Supplementary editions for the sciences, arts, and technology

The Académie is continuing work on the ninth edition, of which the first volume (A to Enzyme) appeared in 1992,[1] Éocène to Mappemonde was published in 2000, and Maquereau to Quotité in 2011. In 1778, the Académie attempted to compile a "historical dictionary" of the French language; this idea, however, was later abandoned, the work never progressing past the letter A.

As the use of English terms by media increased over the years, the Académie has tried to prevent the Anglicization of the French language. For example, the Académie has recommended to avoid loanwords from modern English (such as walkman, computer, software and e-mail), in favour of neologisms, i.e. newly coined French words derived from existing ones (baladeur, ordinateur, logiciel, and courriel respectively, the first three being at present well-established words of the French language).

The Academy, despite working on the modernization of the French orthography, has sometimes been criticized for allegedly behaving in an overly conservative manner. A recent controversy involved the officialization of feminine equivalents for the names of several professions. For instance, in 1997, Lionel Jospin's government began using the feminine noun "la ministre" to refer to a female minister, following the official practice of Canada, Belgium and Switzerland and a frequent, though until then unofficial, practice in France. The Académie, however, insisted in accordance with French grammar rules on the traditional use of the masculine noun, "le ministre", for a minister of either gender. Use of either form remains highly controversial.

The Académie française is responsible for awarding several different prizes in various fields (including literature, painting, poetry, theatre, cinema, history, cheese, and translation). Almost all of the prizes were created during the twentieth century, and only two prizes were awarded before 1780. In total, the Académie awards more than sixty prizes, most of them annually.

The Académie française intervened in June 2008 in French parliamentary debate about regional languages (Alsatian, Basque, Breton, Catalan, Corsican, Occitan, and Francoprovençal), when it protested against constitutional protection for them.[7]

Further information: List of members of the Académie française

The current members of the Académie française are:

Retrieved from "https://tme.miraheze.org/w/index.php?title=Académie_française&oldid=30610"
Categories:
Hidden categories:
Cookies help us deliver our services. By using our services, you agree to our use of cookies.