From The Multilingual Encyclopedia
Jump to navigation Jump to search
This article is about the number. For the year, see AD 8. For other uses, see 8 (disambiguation) and Number Eight (disambiguation).

There are a total of eight convex deltahedra.

A polygon with eight sides is an octagon. Figurate numbers representing octagons (including eight) are called octagonal numbers.

A polyhedron with eight faces is an octahedron. A cuboctahedron has as faces six equal squares and eight equal regular triangles.

A cube has eight vertices.

The number 8 is involved with a number of interesting mathematical phenomena related to the notion of Bott periodicity. For example, if O(∞) is the direct limit of the inclusions of real orthogonal groups

Clifford algebras also display a periodicity of 8. For example, the algebra Cl(p + 8,q) is isomorphic to the algebra of 16 by 16 matrices with entries in Cl(p,q). We also see a period of 8 in the K-theory of spheres and in the representation theory of the rotation groups, the latter giving rise to the 8 by 8 spinorial chessboard. All of these properties are closely related to the properties of the octonions.

The spin group Spin(8) is the unique such group that exhibits the phenomenon of triality.

A figure 8 is the common name of a geometric shape, often used in the context of sports, such as skating. Figure-eight turns of a rope or cable around a cleat, pin, or bitt are used to belay something.

English eight, from Old English eahta, æhta, Proto-Germanic *ahto is a direct continuation of Proto-Indo-European *oḱtṓ(w)-, and as such cognate with Greek ὀκτώ and Latin octo-, both of which stems are reflected by the English prefix oct(o)-, as in the ordinal adjective octaval or octavary, the distributive adjective is octonary. The adjective octuple (Latin octu-plus) may also be used as a noun, meaning "a set of eight items"; the diminutive octuplet is mostly used to refer to eight sibling delivered in one birth.

It has been argued that, as the cardinal number 7 is the highest number of item that can universally be cognitively processed as a single set, the etymology of the numeral eight might be the first to be considered composite, either as "twice four" or as "two short of ten", or similar. The Turkic words for "eight" are from a Proto-Turkic stem *sekiz, which has been suggested as originating as a negation of eki "two", as in "without two fingers" (i.e., "two short of ten; two fingers are not being held up");[2] this same principle is found in Finnic *kakte-ksa, which conveys a meaning of "two before (ten)". The Proto-Indo-European reconstruction *oḱtṓ(w)- itself has been argued as representing an old dual, which would correspond to an original meaning of "twice four". Proponents of this "quaternary hypothesis" adduce the numeral 9, which might be built on the stem new-, meaning "new" (indicating the beginning of a "new set of numerals" after having counted to eight).[3]

Evolution of the numeral 8 from the Indians to the Europeans

The modern 8 glyph, like all modern Hindu-Arabic numerals (other than zero) originates with the Brahmi numerals. The Brahmi numeral for eight by the 1st century was written in one stroke as a curve └┐ looking like an uppercase H with the bottom half of the left line and the upper half of the right line removed. However the eight glyph used in India in the early centuries of the Common Era developed considerable variation, and in some cases took the shape of a single wedge, which was adopted into the Perso-Arabic tradition as ٨ (and also gave rise to the later Devanagari numeral ८; the alternative curved glyph also existed as a variant in Perso-Arabic tradition, where it came to look similar to our glyph 5.[year needed]

The numerals as used in Al-Andalus by the 10th century were a distinctive western variant of the glyphs used in the Arabic-speaking world, known as ghubār numerals (ghubār translating to "sand table"). In these numerals, the line of the 5-like glyph used in Indian manuscripts for eight came to be formed in ghubār as a closed loop, which was the 8-shape that became adopted into European use in the 10th century.[4]

Just as in most modern typefaces, in typefaces with text figures the 8 character usually has an ascender, as, for example, in

The infinity symbol ∞, described as a "sideways figure eight" is unrelated to the 8 glyph in origin; it is first used (in the mathematical meaning "infinity") in the 17th century, and it may be derived from the Roman numeral for "one thousand" CIƆ, or alternatively from the final Greek letter, ω.

The numeral eight in Greek numerals, developed in Classical Greece by the 5th century BC, was written as Η, the eighth letter of the Greek alphabet.

The Chinese numeral eight is written in two strokes, 八; the glyph is also the 12th Kangxi radical. 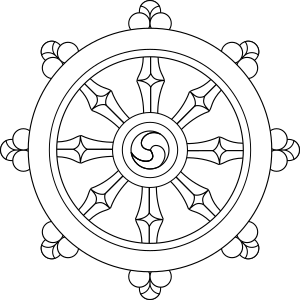 In Buddhism, the 8-spoked Dharmacakra represents the Noble Eightfold Path

As a lucky number[edit | edit source]

In music and dance[edit | edit source]

In film and television[edit | edit source]

In sports and other games[edit | edit source] 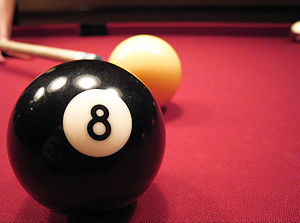 An 8-ball in billiards

Retrieved from "https://tme.miraheze.org/w/index.php?title=8&oldid=22574"
Categories:
Hidden categories:
Cookies help us deliver our services. By using our services, you agree to our use of cookies.