From The Multilingual Encyclopedia
Jump to navigation Jump to search
See also: Christianity in the 4th century 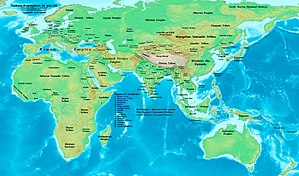 Eastern Hemisphere at the beginning of the 4th century AD.

Eastern Hemisphere at the end of the 4th century AD.

The 4th century (per the Julian calendar and Anno Domini/Common era) was that century which lasted from 301 to 400. In the West, the early part of the century was shaped by Constantine the Great, who became the first Roman emperor to convert to Christianity. Gaining sole reign of the empire, he is also noted for re-establishing a single imperial capital, choosing the site of ancient Byzantium in 330 (over the current capitals, which had effectively been changed by Diocletian's reforms to Milan in the West, and Nicomedeia in the East) to build the city soon called Nova Roma (New Rome); it was later renamed Constantinople in his honor.

The last emperor to control both the eastern and western halves of the empire was Theodosius I. As the century progressed after his death it became increasingly apparent that the empire had changed in many ways since the time of Augustus. The two emperor system originally established by Diocletian in the previous century fell into regular practice, and the east continued to grow in importance as a centre of trade and imperial power, while Rome itself diminished greatly in importance due to its location far from potential trouble spots, like Central Europe and the East. Late in the century Christianity became the official state religion, and the empire's old pagan culture began to disappear.[citation needed] General prosperity was felt throughout this period, but recurring invasions by Germanic tribes plagued the empire from AD 376 onward. These early invasions marked the beginning of the end for the Western Roman Empire.

According to archaeologists, sufficient archaeological correlates of state-level societies coalesced in the 4th century to show the existence in Korea of the Three Kingdoms (AD 300/400–668) of Baekje, Goguryeo, and Silla.

Historians of the Roman Empire may refer to the "Long Fourth Century" which is the period spanning the fourth century proper, but starting earlier with the accession of the emperor Diocletian in 284 and ending later with the death of Honorius in 423 or of Theodosius II in 450. [1]

Contemporary bronze head of Constantine I.

Tikal had a population of about 100,000 when it was conquered by Teotihuacan, less than a fourth of its peak population[4]

Retrieved from "https://tme.miraheze.org/w/index.php?title=4th_century&oldid=15742"
Categories:
Hidden categories:
Cookies help us deliver our services. By using our services, you agree to our use of cookies.