The Spanish constitutional crisis[1] is an ongoing political conflict between the Government of Spain and the Generalitat of Catalonia over the issue of the 2017 Catalan independence referendum, starting after the law intending to allow such a referendum was denounced by the Spanish government under Prime Minister Mariano Rajoy and subsequently suspended by the Constitutional Court until it ruled on the issue.[2][3] The Catalan government under President Carles Puigdemont has announced that neither central Spanish authorities nor the courts would halt their plans and that it intends to hold the vote anyway, sparking a legal backlash that has quickly spread from the Spanish and Catalan governments to Catalan municipalities—as local mayors were urged by the Generalitat to provide logistical support and help for the electoral process to be carried out—as well as to the Constitutional Court, the High Court of Justice of Catalonia and state prosecutors.[2][4][5]

By 15 September, as pro-Catalan independence parties kicked-off their referendum campaigns, the Spanish government had launched an all-out legal offensive to thwart the 1 October vote, including threats of a financial takeover of much of the Catalan budget, police seizing pro-referendum posters, pamphlets and leaflets which had been regarded as illegal and criminal investigations ordered on the over 700 local mayors who had publicly agreed to help stage the referendum.[6][7] Tensions between the two sides reached a critical point after Spanish police raided the Catalan government headquarters in Barcelona on 20 September and arrested 13 senior Catalan officials, with some international media describing the events as "one of the worst political crises in modern Spanish history".[8]

Recent increase in support for Catalan independence has its roots in a Constitutional Court ruling in 2010 upheld most of the regional 2006 Statute of Autonomy granting new powers of self-rule to the region. The ruling came after four years of deliberation, deciding on a constitutional appeal filed by the conservative People's Party (PP) under Mariano Rajoy—then the main opposition party of Spain to José Luis Rodríguez Zapatero's Spanish Socialist Workers' Party government—and was met with anger and street protests in Catalonia.[9][10] Shortly after the PP took power in Spain, and after a massive independence demonstration took place in Barcelona on 11 September 2012—Catalonia's National Day—the Catalan government under President Artur Mas called a snap regional election and set out to initiate Catalonia's process towards independence.[11]

After a pro-independence coalition formed by the Junts pel Sí alliance and the Popular Unity Candidacy won a slim majority in the Parliament in the 2015 regional election, new President Carles Puigdemont promised to organise a binding independence referendum based on results from an non-binding vote in 2014, when about 80% of those who voted were believed to have backed independence for the region—albeit on an estimated turnout around or below 40%.[12] The Catalan government invoked right of people to self-determination and Catalonia's political, economical and cultural background to back up his proposal of a referendum on Catalan independence.[13][14] The Government of Spain, now with Mariano Rajoy as Prime Minister, opposed such a vote, arguing that any referendum on Catalan independence would go against the country's 1978 Constitution, as it made no provision for a vote on self-determination.[15]

On 9 June 2017, Catalan President Puigdemont announced that the planned independence referendum would be held on 1 October. The Catalan government criticized the attitude of the Spanish government in refusing to negotiate a referendum and accused it of behaving undemocratically.[16]

On 6 September 2017, the ruling Junts pel Sí (JxSí) coalition and its parliamentary partner, the Popular Unity Candidacy (CUP), passed a controversial law in the Parliament of Catalonia that was to provide the legal framework for the intended independence referendum scheduled for 1 October. The way in which the law had been pushed through Parliament also became an issue of controversy. Catalan opposition parties accused JxSí and CUP of fast-tracking the law through parliament by altering the day's agenda to introduce the issue, violating their parliamentary rights by skipping legally-required steps for bills to go through before being put up to vote. Members from JxSí acknowledged it was not their preferred method, but justified it in that it was the only way to get the bill on the floor without being blocked and that it was not "any ordinary law". Shortly after the parliamentary vote, in which most of the opposition MPs walked out from the chamber without voting the bill, the Catalan regional government signed the decree calling for the 1 October referendum.[17][18]

The People's Party-led Spanish government under Prime Minister Mariano Rajoy announced that it would appeal the bill to the Constitutional Court, which agreed to hear its unconstitutionality appeals and subsequently suspended the law and the referendum until it was to rule upon the matter. Despite the referendum suspension, the Catalan government announced it would anyway proceed with the vote.[19][20] This prompted Attorney General José Manuel Maza to ask security forces to investigate on possible preparations from the Catalan government to hold the vote, as well as announcing he would present criminal charges against members of both the regional parliament and government for voting and signing off the referendum. The national government proceeded to deploy a series of legal measures intended to nullify the referendum, while also warning local councils in Catalonia to either impede or paralyse efforts to carry out the vote.[2][17] Previously, local mayors had been given 48 hours by the regional government to confirm the availability of polling stations for 1 October.[21][22] On 7 September and under a similar procedure as the day previously, pro-independence lawmakers in the Parliament of Catalonia passed the legal framework that was to prevail the Spanish one should a majority vote for the 'Yes' to independence choice.[19]

Within the next two days, nearly 74% of Catalan municipalities—comprising about 43% of the Catalan population—had agreed to provide the needed polling stations for the referendum, whereas many of the most-populated urban areas—representing 24% of Catalan inhabitants—had voiced their opposition to the vote.[23] The largest city and capital of Catalonia, Barcelona—accounting for about 20% of the region's population—was caught in the middle, with its local mayor, Ada Colau, refusing to make a statement whether the municipality would provide logistic support to the referendum or not while rejecting putting public servants at risk; she, however, voiced her support for the people's right to vote in a fair and legal referendum.[24][25] Concurrently, President of Catalonia Carles Puigdemont, Vice President Oriol Junqueras, the entire Catalan government as well as parliamentary officials allowing the referendum law to be put to vote in Parliament—including Parliament Speaker Carme Forcadell—faced charges of disobedience, misusing public funds and making deliberately unlawful decisions as elected officials as the High Court of Justice of Catalonia agreed to hear the criminal complaints filled by state prosecutors.[4][26] 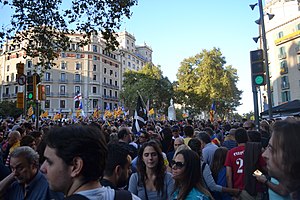 Protests in Barcelona after the arrest of fourteen Catalan government officials on 20 September.

A decision on 13 September from Spain's public prosecutors to order a criminal probe of all local mayors who had publicly announced they would help stage the independence referendum—totalling over 700—came the day after the Constitutional Court had accepted the Spanish government's request to suspend the second of the two laws that had been approved by the seccessionist majority in the Catalan parliament the previous week. The probe meant that prosecutors could choose to present criminal charges—or even arrest, if failing to answer the summons—local mayors who disobeyed the Constitutional Court's ruling. As part of a series of moves to block the Catalan referendum, prosecutors had also instructed police officials to seize ballot boxes, election flyers and other items that could be of use in the illegal vote, whereas the Constitutional Court had instructed regional government officials to show how they were preventing the vote from going ahead within a 48-hour deadline.[27][28][29] In response, the Catalan government sent a letter to Treasury Minister Cristóbal Montoro announcing that it would stop sending weekly financial accounts to Spain's central government, a previously-established obligation that was meant to verify whether the region was using public money for the promotion of its independence drive as well as a requirement for the region's access to a funding programme to autonomous communities established in 2012.[30] The Spanish government then proceeded to take direct control of most of Catalonia's invoice payments.[31][32]

In a search on 19 September, Spanish police seized significant election material which had been in store by referendum organizers at the offices of a private delivery company in Terrassa. These included voting cards contained in envelopes with the Catalan government's logo.[33] The next day, the Civil Guard raided Generalitat offices and arrested fourteen senior officials from the Catalan government—most notably, these included Josep Maria Jové, deputy to regional Vice President Oriol Junqueras.[34][35][36] This came after mayors from towns supporting the referendum were questioned in court by state prosecutors.[37] Regional premier Carles Puidgemont condemned the actions as "anti-democratic and totalitarian", accusing the Spanish government of 'de facto' imposing a state of emergency and of suspending Catalonia's autonomy after it took effective control over Catalan finances.[38] Public protests sparked in Barcelona after news of the arrests emerged, with left-wing political party Podemos and Barcelona mayoress Ada Colau joining the growing criticism on Mariano Rajoy's government crackdown on public servants, dubbing it as an "authoritarian regression". The previous day, the Congress of Deputies had voted down a motion from Ciudadanos to support the Spanish government's heavy-handed response to the referendum, which was rejected by 166 votes to 158.[39][15][8] Prime Minister Rajoy defended his government's actions in that "What we’re seeing in Catalonia is an attempt to eliminate the constitution and the autonomous statute of Catalonia... Logically, the state has to react. There is no democratic state in the world that would accept what these people are trying to do. They’ve been warned and they know the referendum can’t take place".[15] Rajoy also called for the Catalonia government to give up its "escalation of radicalism and disobedience", calling for them to "Go back to the law and democracy" and dubbing the referendum a "chimera", as tens of thousands gathered in the streets of Barcelona and other Catalan cities to protest police actions.[40][41][42] The Spanish government did not rule out invoking Section 155 of the Spanish Constitution, which would allow the central government to adopt "the necessary measures to compel regional authorities to obey the law"—in practice, allowing for the autonomy's effective suspension and direct rule of the region.[8]

On 21 September, the Catalan government acknowledged that the raid and arrests in the previous day severely hampered the referendum's logistics by preventing any alternative election data center to be established in time for the vote to take place.[43] Nonetheless, Catalan Vice President Junqueras called for people to turn out and mobilize on 1 October, turning the social response into a "censure motion to Rajoy", stating that "If there is any possibility of change in Spain, democracy must triumph in Catalonia".[44][45] As street protests continued throughout Catalonia, additional police reinforcements were sent by the Spanish government to block any moves to hold the referendum on 1 October.[46][47] Spanish prosecutors formally accused some protesters in Barcelona of sedition, after several Civil Guard patrol cars had been vandalized on Wednesday night.[48] By 23 September, the Spanish government announced that the Mossos d'Esquadra—the regional police force—were to be subordinated to a single command dependent of the Spanish government and that the Interior Ministry would assume coordination over all security forces in Catalonia.[49] The previous day, several hundred students had announced a permanent occupation of the historic building of the University of Barcelona, protesting the state's actions.[50][51][52]

Retrieved from "https://tme.miraheze.org/w/index.php?title=2017_Spanish_constitutional_crisis&oldid=23741"
Categories:
Hidden category:
Cookies help us deliver our services. By using our services, you agree to our use of cookies.