The Democratic People's Republic of Korea conducted its sixth nuclear test on 3 September 2017, stating it was its first test of a thermonuclear weapon (hydrogen bomb).[5] The United States Geological Survey reported an earthquake of 6.3-magnitude not far from North Korea's Punggye-ri nuclear test site.[6] South Korean authorities said the earthquake seemed to be artificial, consistent with a nuclear test.[7] The USGS, as well as China's earthquake administration, reported that the initial event was followed by a second, smaller, earthquake at the site, several minutes later, which was characterized as a collapse of the cavity.[8][9] 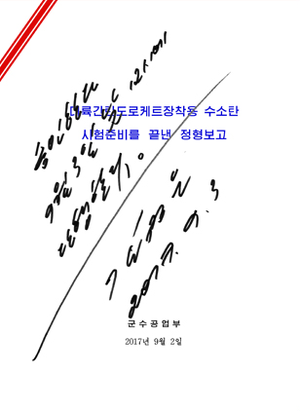 Order to conduct the test, signed by Kim Jong-un on 3 September 2017

North Korea said that it detonated a hydrogen bomb that could be loaded onto an intercontinental ballistic missile (ICBM).[10] In the announcement it was claimed that the warhead had a variable yield "the explosive power of which is adjustable from tens kiloton to hundreds kiloton ... which can be detonated even at high altitudes for super-powerful EMP attack".[11] A later technical announcement called the device a "two-stage thermo-nuclear weapon" and stated experimental measurements were fully compatible with the design specification, and there had been no leakage of radioactive materials from the underground nuclear test.[12][5]

Photographs of North Korean leader Kim Jong-un inspecting a device resembling a thermonuclear weapon warhead were released a few hours before the test.[13]

According to the chief of the South Korean parliament's defense committee, Kim Young-Woo, the nuclear yield was equivalent to about 100 kilotons of TNT (100 kt): "The North's latest test is estimated to have a yield of up to 100 kilotons, though it is a provisional report."[14]

On 3 September, South Korea’s weather agency, the Korea Meteorological Administration, estimated that the nuclear blast yield of the presumed test was between 50 to 60 kilotons.[15] In contrast, the independent seismic monitoring agency NORSAR estimated that the blast had a yield of about 120 kilotons, based on a seismic magnitude of 5.8.[2] The Federal Institute for Geosciences and Natural Resources in Germany estimates a higher yield at "a few hundred kilotons" based on a detected tremor of 6.1 magnitude.[16]

On 5 September, the Japanese government gave a yield estimate of about 160 kilotons, based on analysing Comprehensive Nuclear-Test-Ban Treaty Organization seismic data, replacing an early estimate of 70 kilotons.[17]

On 6 September, U.S. intelligence released an early assessment that the yield was 140 kilotons, with an undisclosed margin of error.[4]

The United Nations Security Council met in an open emergency meeting on September 4, 2017, at the request of the US, South Korea, Japan, France and the UK.[18]

US President Donald Trump wrote on Twitter: "North Korea has conducted a major Nuclear Test. Their words and actions continue to be very hostile and dangerous to the United States".[24][25] Trump was asked whether the U.S. would attack North Korea and replied: "We'll see."[26] Defense Secretary James Mattis warned North Korea that it would be met with a "massive military response" if it threatened the United States or its allies.[27]

Retrieved from "https://tme.miraheze.org/w/index.php?title=2017_North_Korean_nuclear_test&oldid=22691"
Categories:
Hidden categories:
Cookies help us deliver our services. By using our services, you agree to our use of cookies.