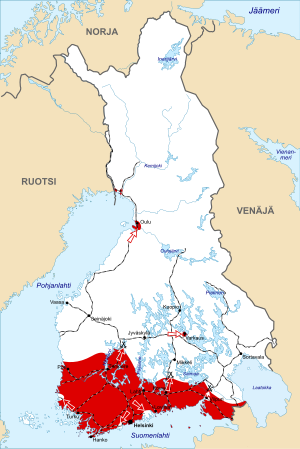 Finnish State Railways in 1918, at the time of the Finnish Civil War

The old Karelian railroad (Finnish: Karjalan rata) between Viipuri (Viborg) and Joensuu is a Template:RailGauge broad gauge line that used to link Joensuu, Sortavala, Hiitola, Antrea (now Kamennogorsk), and Viipuri (Vyborg). Originally built in 1892-1894 by Finnish State Railways in the Grand Duchy of Finland, in the 1940s most of the railway up to Niirala was ceded by Finland to the Soviet Union in the Moscow Peace Treaty, Moscow Armistice and Paris Peace Treaty as a result of the Winter War and Continuation War. Now the track is located in Leningrad Oblast (Karelian Isthmus), Republic of Karelia and North Karelia. The Sortavala–Joensuu link across the border was abolished after the Continuation War, but was since restored and is currently in use for cargo traffic. 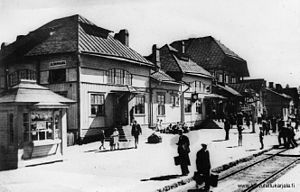 The old railway station in Elisenvaara, constructed around 1893, was destroyed during the Winter War

The decision to build a 311-kilometre (193 mi) railway from Viipuri (Viborg) to Joensuu was made by the Diet of Finland in 1888. Work on the railroad started in 1890, immediately after the Savonia railroad was finished.

The bombing of the Elisenvaara station of the Karelian railroad on 20 June 1944, during the final stages of the Continuation War, was the most fatal bombing in Finnish history; over one hundred civilians were killed when bombs hit a train of Karelian evacuees.[2]

After the Winter War and Continuation War Karelian Isthmus and Ladoga Karelia with Viipuri/Viborg, Hiitola, Elisenvaara and Sortavala (Serdopol) were ceded to the Soviet Union, and most stations of the line got to the Soviet side of the new border. In the Moscow Peace Treaty on March 12, 1940, Finland lost the section Viipuri–Antrea–Hiitola–Jaakkima–Sortavala–Matkaselkä–Värtsilä (240 km (150 mi)) to the Soviet Union. Only the Joensuu–Niirala section (71 km (44 mi)) remained in Finland.

Finland built a new railroad on the Finnish side of the new border in the early 1950s, connecting Imatra with the northern part of the Karelian railroad at Säkäniemi (now Parikkala). 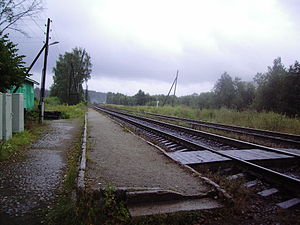 In Russia the railroad is used to ship petroleum to the ports of the Gulf of Finland as well as lumber and iron ore pellets from Karelia.

Note: Times, as of 2007, are with all stops and are approximate.

Retrieved from "https://tme.miraheze.org/w/index.php?title=Vyborg–Joensuu_railroad&oldid=38943"
Categories:
Hidden categories:
Cookies help us deliver our services. By using our services, you agree to our use of cookies.