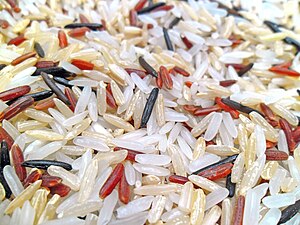 Rice (Greek 6p15"zt, Latin oryza, French riz, Italian riso, Spanish arros, derived from the Arabic), a well-known cereal, botanical name Oryza sativa. According to Roxburgh, the great Indian botanist, the cultivated rice with all its numerous varieties has originated from a wild plant, called in India Newaree or Nivara, which is indigenous on the borders of lakes in the Circars and elsewhere in India, and is also native in tropical Australia. The rice plant is an annual grass with long linear glabrous leaves, each provided with a long sharply pointed ligule. The spikelets are borne on a compound or branched spike, erect at first but afterwards bent downwards. Each spikelet contains a solitary flower with two outer small barren glumes, above which is a large tough, compressed, often awned, flowering glume, which partly encloses the somewhat similar pale. Within these are six stamens, a hairy ovary surmounted by two feathery styles which ripens into the fruit (grain), and which is invested by the husk formed by the persistent glume and pale. The cultivated varieties are extremely numerous, some kinds being adapted for marshy land, others for growth on the hill A, spikelet (enlarged) B, bearded variety sides. The cultivators p g) y' make two principal C, spikelet of B (enlarged).

divisions according as the sorts are early or late. Rice has been cultivated from time immemorial in tropical countries. According to Stanislas Julien a ceremonial ordinance was established in China by the emperor Chin-nung 2800 years B.C., in accordance with which the emperor sows the rice himself while the seeds of four other kinds may be sown by the princes of his family. This fact, joined to other considerations, induced Alphonse de Candolle to consider rice as a native of China. It was very early cultivated in India, in some parts of which country, as in tropical Australia, it is, as we have seen, indigenous. It is not mentioned in the Bible, but its culture is alluded to in the Talmud. There is proof of its culture in the Euphrates valley and in Syria four hundred years before Christ. Crawfurd, on philological grounds, considers that rice was introduced into Persia from southern India. The Arabs carried the plant into Spain. Rice was first cultivated in Italy near Pisa in 1468. It was not introduced into S. Carolina until 1700, and then, it is said, by accident, although at one time the southern United States furnished a large proportion of the rice introduced into commerce. Rice sports into far more varieties than any of the corns familiar to Europeans; for some varieties grow in the water and some on dry land; some come to maturity in three months, while others take four and six months to do so. A very full account of the cultivation of rice in India will be found in Sir George Watt's Dictionary of the Economic Products of India. Rice constitutes one of the most important articles of food in all tropical and subtropical countries, and is one of the most prolific of all crops. The rice yields best on low lands subject to occasional inundations, and thus enriched by alluvial deposits. An abundant rainfall during the growing season is also a desideratum. Rice is sown broadcast, and in some districts is transplanted after a fortnight or three weeks. No special rotation is followed: indeed the soil best suited for rice is ill adapted for any other crop. In some cases little manure is employed, but in others abundance of manure is used. No special tillage is required, but weeding and irrigation are requisite. Rice in the husk is known as " paddy." On cutting across a grain of rice and examining it under the microscope, first the flattened and dried cells of the husk are seen, and then one or two layers of cells elongated in a direction parallel to the length of the seed, which contain the gluten or nitrogenous matter. Within these, and forming by far the largest part of the seed, are large polygonal cells filled with very numerous and very minute angular starch grains. Rice is not so valuable as a food as some other cereals, inasmuch as the proportion of nitrogenous matter (gluten) is less. Payen gives only 7% of gluten in rice as compared with 22% in the finest wheat, 14 in oats and 12 in maize. The percentage of potash in the ash is as 18 to 23 in wheat. The fatty matter is also less in proportion than in other cereals. Rice, therefore, is chiefly a farinaceous food, and requires to be combined with fatty and nitrogenous substances, such as milk or meat gravy, to satisfy the requirements of the system.

A large proportion of the rice brought to Europe is used for starch-making, and some is taken by distillers of alcohol. Rice is also -the source of a drinking spirit in India, known as arrack, and the national beverage of Japan - sake - is prepared from the grain by means of an organic ferment.

Retrieved from "https://tme.miraheze.org/w/index.php?title=Rice&oldid=35799"
Categories:
Cookies help us deliver our services. By using our services, you agree to our use of cookies.