From The Multilingual Encyclopedia
Revision as of 07:47, 20 May 2020 by Stranger195 (talk | contribs) (Created page with: thumb|[[accommodation (eye)|Eye focusing ideally collects all light rays from a point on an object into a corresponding point on the retina....)
(diff) ← Older revision | Latest revision (diff) | Newer revision → (diff)
Jump to navigation Jump to search

Eye focusing ideally collects all light rays from a point on an object into a corresponding point on the retina.

A demonstration of camera focus on different distances, showing a bamboo rooftop 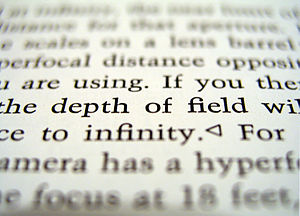 Text on a page that is partially in focus, but mostly not in varying degrees

In geometrical optics, a focus, also called an image point, is the point where light rays originating from a point on the object converge.[1] Although the focus is conceptually a point, physically the focus has a spatial extent, called the blur circle. This non-ideal focusing may be caused by aberrations of the imaging optics. In the absence of significant aberrations, the smallest possible blur circle is the Airy disc, which is caused by diffraction from the optical system's aperture. Aberrations tend to get worse as the aperture diameter increases, while the Airy circle is smallest for large apertures.